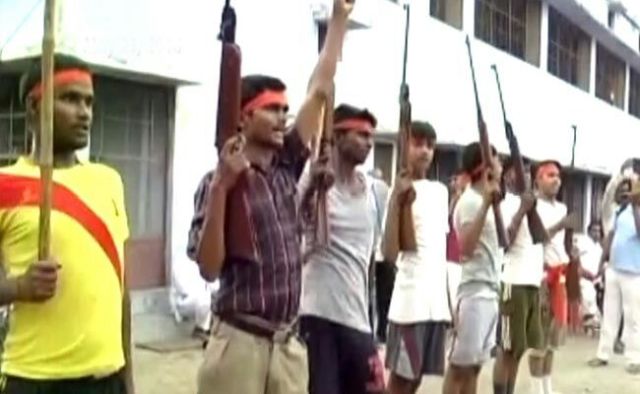 New Delhi: In a strange  appeal, a Bajrang Dal leader of Uttar Pradesh asked the Hindu community to spend more to buy guns instead of expensive mobile phones to protect the Hindu religious identity, said a report published in national herald.

During the Sant Samaj Sammelan in Meerut District of Uttar Pradesh, Balraj Singh Dungar Regional Coordinator of Bajrang Dal also said that because of the rise of evil forces in country the Hindu Dharma is in danger’.

All Hindu Gods and Goddesses carried arms to protect the society and religion, precisely all Hindu fellow should get arms and ammunition, to defend the religion, he added.

While, in the same convention, the Maha-Mandaleshar of Sankat Mochan Hanuman Sri Balaji and Sri Shani Dham Peeth, Mahendra Das, asked Hindus to not visit the `Mazars’.

He didn’t specify about the evil forces, but elucidated on the Love Jihad, how the practice of love Jihad is spreading the trap.

Recently the VHP has launched a Massive membership campaign in Uttar Pradesh to enrol the volunteers in Bajrang Dal for their special camps.

This is not the first time when Bajrang Dal asked the Hindu fellows to carry the ammunition and arm, but before that, they had organized several defence training camps.