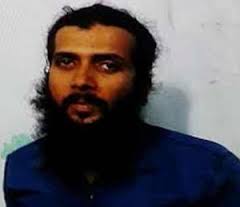 A court in Delhi on Thursday turned down the bail plea of Indian Mujahideen co-founder Yasin Bhatkal and granted Delhi Police time, till May 8, to investigate further in the 2010 Jama Masjid terror attack case.

Additional Sessions Judge Daya Prakash dismissed the bail plea of Bhatkal moved by his counsel, advocate MS Khan. Khan has sought Bhatkal’s bail on the ground that police have not filed charge sheet against his client even after completion of statutory period of 90 days from the date of Bhatkal’s arrest in the case.

Police, while seeking more time for completing the probe in the case, said that Pakistani national Zia-ur-Rehman alias Waqas, arrested recently, was yet to be quizzed in the matter.

The court allowed the police plea and granted them time to complete their probe against Bhatkal and his aide, Asadullah Akhtar, by May 8.