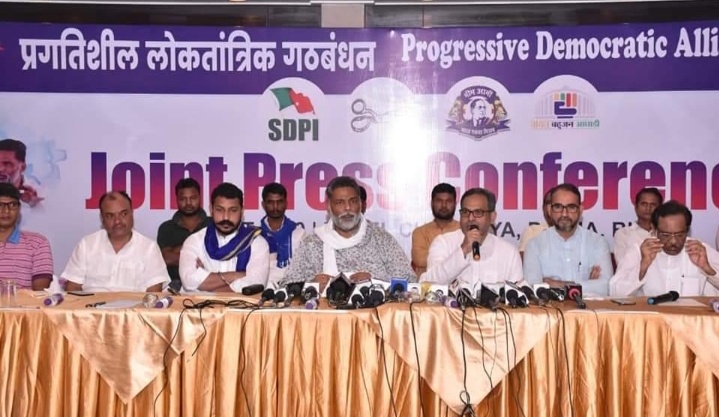 Patna: For the ensuing Bihar assembly election, the Social Democratic Party of India (SDPI) on Wednesday announced its list of 15 candidates here at a press conference.  SDPI is one of the constituents in a newly formed and much talked about political alliance in Bihar that is Progressive Democratic Alliance (PDA) which has 8 partners.

He reiterated that all 8 allied parties of PDA are committed to bring a much awaited change in the style of governance in Bihar which is reeking under poverty and backwardness. The alliance PDA which will contest all seats in Bihar assembly election, he added.

Faizy said PDA is all set to bring a political change of Bihar with massive support by the people who are fed up of existing anti people, opportunist, and fascist alliances ruling over the state for the last 30 years without bringing any change to the life of general masses. He said, PDA is committed to the overall development of Bihar and to reinstate the constitutional by means of social justice values.

SDPI leader appealed to the people of Bihar to support PDA and elect its candidates to make Bihar a vibrant and progressive state.

Political observers feel that the contest will be  tougher this time  for the ruling NDA as it is facing an acute anti-incumbency wave while  late Ram Vilas Paswan’s LJP, which is fighting elections separately under the tacit  backing of the BJP,  would eat the votes of   ruling JD(U).