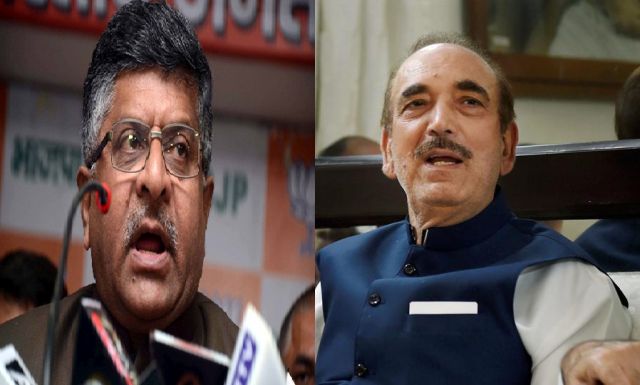 New Delhi : The BJP on Friday attacked senior Congress leader and former Jammu and Kashmir Chief Minister Ghulam Nabi Azad for his remarks about “the Indian Army killing more civilians rather than terrorists” in the state, and demanded action against him.

The party said that Azad’s statement was “irresponsible, shameful and deeply regrettable” and asked the Congress leadership to clarify “what action they are planning against Azad”.

The BJP said it was shocked that such a statement should come from a person who has been the Chief Minister of Jammu and Kashmir and has witnessed the “brutal face of the terrorism in the state from Pakistan side”.

The Bharatiya Janata Party (BJP) also said that the Congress led by Rahul Gandhi and “blessed” by Sonia Gandhi is at present making observations “in sync with the terrorists and their patrons”.

Addressing a presser here, BJP’s Ravi Shankar Prasad said: “Given the senior Congress leaders’ pathological hatred towards Prime Minister Narendra Modi and the BJP, they have stooped to this extent where they are seeking to compromise the courage and respect of the armed forces.”

“I am asking this (action) because Congress’ Azad who has said that the forces are killing the locals more in Jammu and Kashmir.”

Prasad said: “This statement of Azad is irresponsible, shameful and deeply regrettable. Today the people who support and vouch for Pakistan would be more happier.”

After Azad’s remarks, the Lashkar-e-Taiba outfit issued a statement saying “we have been of the same opinion as the ones expressed by Ghulam Nabi Azad and others”.

“Today what the Congress leaders are saying is being supported by the LeT. What kind of politics is this? Congress is standing with those who are trying to break the country,” he said.

Prasad said the BJP “takes responsibility” as it charged the Congress for their “anti-national” stand. “That the Congress of today led by Rahul Gandhi and blessed by Soniaji is designed to make observations and behaviour in sync with the terrorists and their patrons,” he said.

Prasad said: “What does he mean to say? What is he indicating?”