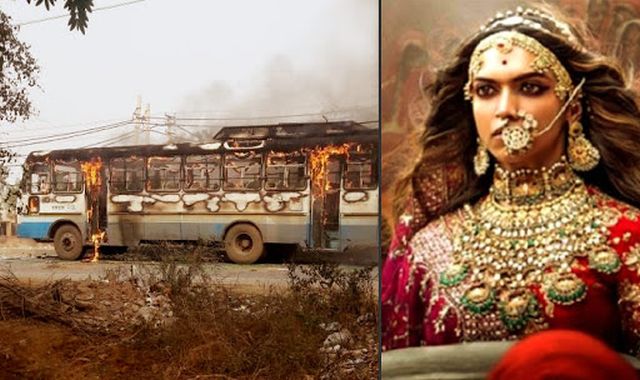 New Delhi : Congress President Rahul Gandhi has hit out at the BJP after a school bus in Haryana’s Gurugram was attacked by Karni Sena supporters over the release of ‘Padmaavat’ and accused the party’s “hatred politics” for “setting the nation on fire”.

“There will never be a cause big enough to justify violence against children. Violence and hatred are the weapons of the weak.

“The BJP’s use of hatred and violence is setting our entire country on fire,” Gandhi said in his tweet hours after a video of scared children crouching in the school bus targeted by hooligans protesting the Sanjay Leela Bhansali movie prompted nationwide outrage on Wednesday.

A Haryana Roadways bus was also set ablaze and another vandalised in Bhondsi area of Gurugram district by a group of around 50 men to protest against the release of “Padmaavat”.

The school bus carrying children and staff was damaged in the stone-pelting, though no one was said to be injured. Images showed shattered panes lying all around inside the bus.

Following the attack, many schools in Gurugram decided to remain closed till January 29.