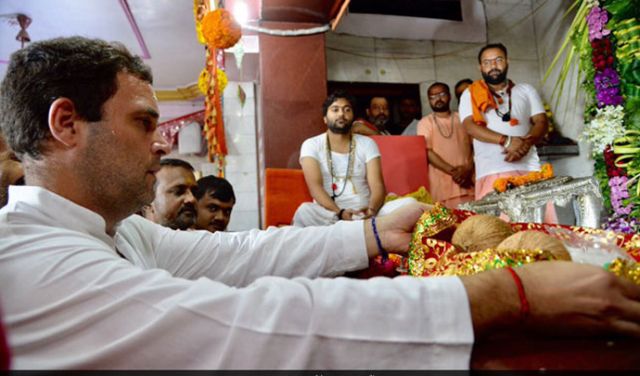 If you cannot beat them, join them. That precisely seems to be the goal of the newly anointed Congress president, Rahul Gandhi, who has truly ushered in a new era for the grand old party.

To counter BJP’s hard Hindutva, the Congress chose to peddle soft-Hindutva to keep its head above the rising waters. This had to work in India where electoral success is often driven by religious and caste considerations rather than social or public service records. The problem with hard Hindutva is that some of its proponents peddle certain ideals that are too uncouth to be in public discourse. The general populace – who usually shares inter-community trust and comfort – is anyway too busy eking out a livelihood to care about anything else. In such a scenario, soft Hindutva becomes more appealing because it appeases without alienating. But truth be told, it’s equally divisive because those who bought Rahul Gandhi’s soft Hindutva today, will soon demand a hardline stance from him. That is how politics pans out. It’s a one way street- you either move forward or out of the race.

So, Gujarat saw the Congress president making nearly two dozen temple visits. Of course, he had every right to do so. What is surprising is that the Congress president while covering 22,000 kilometres, according to a website, didn’t find a single church, gurdwara or mosque to visit. He instead chose to overlook India’s uniquely secular credentials and held on to his “janeu” to emerge as an “alternate” political choice.

Caste politics is not new in India and election results over the years bear a testimony to that. And, in all likelihood, Rahul Gandhi too will succeed to appeal to the voters. What we saw in Gujarat will be repeated in the coming elections in Karnataka and the other states to follow.

And if that happens, minorities will lose their voice completely. It is not just about Muslims or Christians or Parsis. It is about the enforcement of the majority’s will against the minorities. The day it happens the word “secular” in the Constitution would be rendered meaningless.

Will it help the Congress? Most likely since the minority votes would not shift en masse towards the hard Hindutva forces. But that success would be short-lived. As alternatives emerge, the Congress may get merged within a third option. But with the divide already too deep, it would be difficult for a third option to taste electoral success.

Earlier today, while TV channels debated the triple talaq bill, officially known as the Muslim Women (Protection of Rights on Marriage) Bill, 2017, even as it was passed in Lok Sabha, the Congress seemed more interested in playing politics of appeasement. Probably, the overt gestures were needed to undo the hurt caused by the sidelining of the minorities in Gujarat.

The Congress actually blocked the bill. The government has a brute majority in the lower house and pushed the bill through. But things may not be that easy in the upper house. Of course, there are certain contentious issues in the bill including the proposed three-year jail term. In all fairness, issues of maintenance, alimony, custodial rights should be sorted out first. The government’s job should be to make sure that a “talaq” does not mean the end of life and livelihood for a woman. The laws should ensure that life after “talaq” should not be harsh on either party just because they failed to adjust themselves vis-a-vis one social contract.

Legal remedies should strive to “reform” and not “punish” people. It is not just the job of the Opposition to oppose, but its duty. However, opposition should be based on logic, and not appeasement-based. Parliament is not a place for electoral campaigns. All political parties, including the ruling BJP, must remember that the decisions you take today may come back to haunt you tomorrow.

The Congress would have had faced lesser criticisms had it not been for the regrettable stand it took in the Shah Bano episode back in 1985.

History is always willing to teach, but only those who are willing to learn.