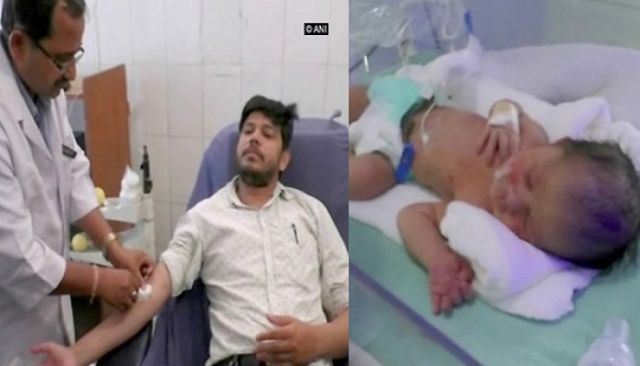 Patna : In another such case within a week or so, a young Muslim man in Bihar broke his Ramadan fast to donate blood to save the life of a newborn, officials said on Monday.

“I broke my fast to save a child because human life is more important than fast. I will keep the fast later to compensate but human life can’t be compensated,” remarked Mohammad Ashfaque who donated blood on Sunday to save the two-day-old child of Ramesh Kumar Singh and Aarti Devi in Darbhanga district.

Aarti had given birth to a boy after a caesarean operation at a private clinic in Darbhanga but the condition of the child deteriorated soon after birth.

After doctors asked Ramesh to procure O Negative group blood for the child, he posted an SOS message on social media, following which Ashfaque contacted them.

“When I came across the message for help, I simply approached the family and rushed to the hospital to donate blood. But doctors refused my offer since I was fasting. So, I broke my fast and consumed fruit juice and some solids,” said Ashfaque, who is in his late 20s.

Last week, Jawed Alam donated blood to an eight-year-old thalassemic boy Rajesh to save his life in Gopalganj district.