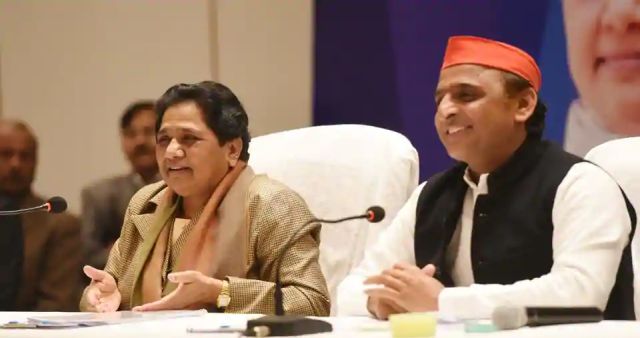 Lucknow : BSP chief Mayawati on Tuesday marked her 63rd birthday with a fulsome attack on Prime Minister Narendra Modi, accusing him of betraying the people on promises made in 2014 and the BJP of dividing people in the name of caste and religion and said the people would vote them out in the coming Lok Sabha elections.

Three days after her party tied up with the Samajwadi Party for the Lok Sabha battle, she addressed a press conference again and said the alliance was giving the ruling Bharatiya Janata Party and others “sleepless nights”.

“But we want that the Muslims should also be given 10 per cent reservation on the same basis,” she said.

Targeting the BJP and Rastriya Swayamsewak Sangh (RSS), the four-time Uttar Pradesh Chief Minister said: “They in the name of religion are not only doing wrong politics but now they have started doing politics on the caste of gods and creating communal divide for political gains.”

She alleged that the government was using religion based identities to alienate masses from one another.

Talking about the alliance of BSP and SP in the state, she said: “This year my birthday has come at a time when the Lok Sabha elections are very near. And keeping the polls in mind, my party has formed the alliance with the SP which has given sleepless nights to the BJP and also others.”

She accused the Centre of using the institutions like CBI to harass its political opponents.

“The best example is of Akhilesh Yadav, and such an act by the government is condemnable and unfortunate. It is a political conspiracy.”

On January 12, Mayawati and SP chief Akhilesh Yadav announced that the they will contest the coming Lok Sabha polls together in Uttar Pradesh sharing 38 seats each of the 80 in the state, while not putting up candidates in Rae Bareli and Amethi, the constituencies of Congress leaders Sonia Gandhi and Rahul Gandhi.

The Congress has otherwise been kept out of the alliance.

The Bahujan Samaj Party supremo also said that it was Uttar Pradesh that decides which party would form the government at the Centre. In the 2014 Lok Sabha elections, the BJP and its allies had won 73 seats.

Appealing to the party workers to vote for the alliance and forget earlier differences, she said: “To make this alliance a success, I appeal to all the workers of the SP and BSP to forget past differences and work for the victory of both parties’ candidates. This would be the biggest gift on my birthday.”

She also warned the party workers that the BJP was capable of spreading confusion and rumours and urged them to remain alert.

Slamming both the Centre and the Adityanath government in Uttar Pradesh, she said the BJP had lost support of the people of the state as they did not fulfil promises made in 2014.

Batting for a complete farm loan waiver of farmers, she said it would have been beneficial to the farmers of the country if the Modi government had implemented the Swmainathan Commission’s recommendations regarding the agriculture sector.

“The ground reality of the agrarian dimension is that small farmers still continue to opt for private money lenders and loans from private banks as there is no structured government policy of waiving their debt.

Mocking at the Congress’s farm loan waivers in Madhya Pradesh, Rajasthan and Chhattisgarh, she said the Congress government announced to waive farm loans till March 31, 2018 after it came to power on December 17, 2018.

The BSP leader blamed the BJP and Congress governments for corruption since Independence.

“Due to corruption, the farmers, Dalits and tribals did not get opportunity to progress. And thus we had to form the BSP after getting disillusioned,” she added.

At the event, Mayawati released the 14th edition of her “Blue Book”, which details her struggles as the BSP leader.

She also wished Akhilesh Yadav’s wife Dimple, an MP from Kannauj, on her birthday which also falls on Tuesday.