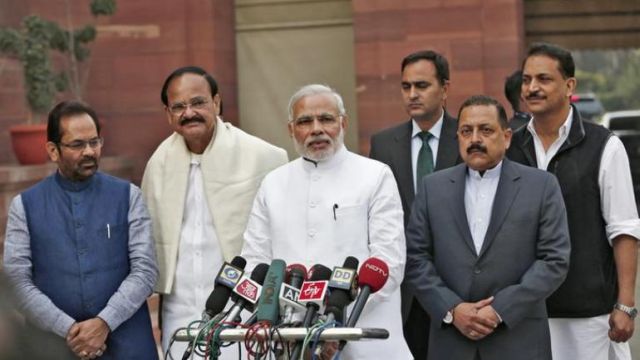 New Delhi : Union cabinet has given its nod to 10 per cent quota for poor among the general categories in Jammu and Kashmir and also approved the provision for SC/ST reservation in promotion in government jobs in the state.

Minister of State in PMO Jitendra Singh said since Jammu and Kashmir is under the President’s Rule, the Cabinet on Tuesday in its meeting took these decisions.

Talking to reporters here at his official residence, Singh thanked Prime Minister Narendra Modi and said it will help a certain section of society which belongs to lower economic strata and will benefit equally Jammu and Kashmir like other states.

He said the government had introduced the provision of reservation in promotion for Scheduled Castes and Scheduled Tribes.

“That too has been approved for Jammu and Kashmir,” he said.

“It will enable Jammu and Kashmir to be beneficiaries of the same public welfare measures for the benefit of the weaker sections that PM Modi initiated for the rest of the country,” he said.

Hailing the decision Singh said that these decisions show the Prime Minister’s extremely sensitive concern for the state.

“In the last 65 years, no earlier government had ever taken an initiative on these lines and even now these decisions have come forth in the interest of the state because of the Modi Government being at the helm at the Centre,” he said.

The Union Cabinet had in January this year took the decision to provide for 10 per cent quota for people belonging to ‘unreserved categories’, including Christians and Muslims, in jobs and education with an annual income limit of Rs 8 lakh and land-holding ceiling of about five acres, highly-placed sources said.

A Constitution Amendment bill for the purpose was recently passed by the Parliament.