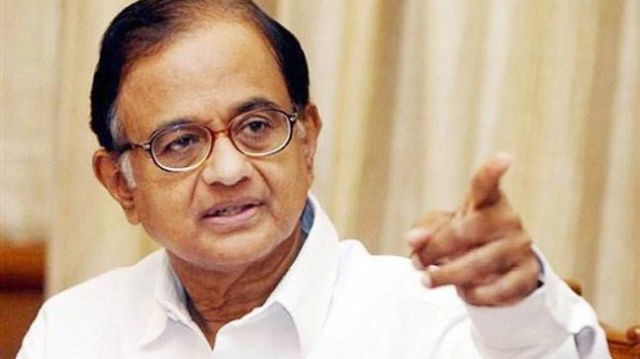 New Delhi : Union Minister Arun Jaitley’s allegation that “jehadists and Maoists” have earned the sympathy of Congress chief Rahul Gandhi is “laughable and absurd” former Finance Minister P. Chidambaram said on Saturday, adding that the party is “stoutly opposed” to the two groups.

Jaitley, in his hard-hitting blog post on Friday had said while “jehadis and Maoists” were threatening the rights of citizens, human rights organisations “taken over by the ultra-left” never spoke of this.

He alleged that even though the Congress historically and ideologically would have been opposed to these groups, they have earned sympathy in Rahul Gandhi’s heart.

“He had no qualms about joining those who raised subversive slogans at JNU (Jawaharlal Nehru University) and Hyderabad.

“With this initial success, the others amongst the so-called federal front have forgotten the dangers of these groups to India and Indian democracy.

“The political adventurists in parties like AAP (Aam Aadmi Party), TMC (Trinamool Congress) and the like only look for a political opportunity in these groups,” he wrote in his blog.

Senior Congress leader Chidambaram, hit out at Jaitley saying the United Progressive Alliance government led by the Congress had fought the jehadis in Jammu and Kashmir and brought down the level of violence substantially.

“The allegation that jehadists and Maoists have earned the sympathy of Rahul Gandhi is laughable and absurd. Congress is stoutly opposed to the two groups,” Chidambaram said in a series of tweets.

“Who can forget that Congress practically lost its entire leadership in Chhattisgarh to Maoist violence? Under UPA, the government fought the jehadists in Jammu and Kashmir and brought down the level of violence substantially,” he added.

The Union Minister, who underwent kidney replacement in May and is yet to rejoin his office, in his blog had said that the terrorists and the jehadis were threatening the human rights of the citizens in Jammu and Kashmir.

“They terrorise courts; they kill editors; they kill innocent citizens and they don’t allow any alternate religion to be practised. Who is threatening the human rights of the citizens of Kashmir? It is obvious that it is the terrorists and the jehadis.”

Meanwhile, Maoists don’t allow any development activity in tribal regions, he said. “They kill innocent tribals who don’t agree with them; they destroy public buildings; they kill security personnel and they even charge a parallel tax from helpless citizens.”

He said human rights were at the core of India’s Parliamentary democracy and the Constitution guaranteed these to every citizen. “Our policy has to be ‘save the human rights of every Indian – be it a tribal or a Kashmiri’ from terrorists,” Jaitley had written.

However, he had accused the human rights organisations of being taken over by the ultra-left and said they never spoke about the deprivation of the human rights of the citizens, and “never shed a tear for the indiscriminate killing of the security personnel”.

“These human right organisations are an over-ground face of the underground. In the system that they believe in, there is no place for life, liberty, equality and free speech, election or Parliamentary democracy.”