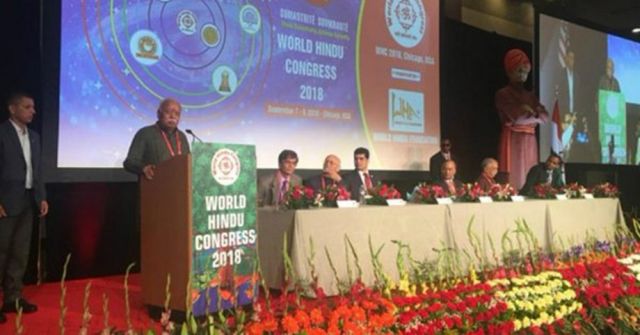 At its best, speeches at the recently concluded World Hindu Congress echoed the soaring spiritual ideals evoked by Swami Vivekananda in Chicago 125 years ago.

Even Mohan Bhagwat, Sarsangchanalak of the Rashtriya Swayamsevak Sangh (RSS), focused essentially on the need for unity and patience among Hindus while fighting obstacles, of which, he said, there would be many. The burden of excavating implied accusations in Bhagwat’s speech fell to his critics.

At the plenary session, the moderator requested speakers to address issues of conflict without naming the speakers or their organisations in the interest of harmony. Other speakers sought to unite the followers of all the great religions that took birth in India — Hinduism, Sikhism, Buddhism and Jainism.

Some of the speakers from Bhagwat to Swami Swaroopananda of the Chinmaya Mission, framed the issues before Hinduism in a moral paradigm. Ashwin Adhin, the Vice President of the Republic of Suriname, began his speech in chaste Hindi, later quoting cognitive scientist George Lakoff: “Facts matter immensely. But to be meaningful they have to be framed in terms of their moral importance.”

The dissonances, between the spiritual and the mundane, were to emerge later on the fringes of the seminars which were part of the Congress. Many of the delegates appropriated to themselves the mantle of a culture besieged by proselytising faiths. There were speakers who urged Hindus to have more children to combat their ‘dwindling population’. Posters warned Hindus of the dangers from ‘love jihad’ (Muslim men ‘enticing’ Hindu women).

In one of the sessions on the media, filmmaker Amit Khanna noted that religion had always played a prominent part in Indian cinema, starting with the earliest mythologicals. “Raja Harishchandra”, the first silent film, he said, was made by Dadasaheb Phalke in 1913. He sought to reassure the audience on the future of Hinduism. “Over 80 percent of Indians are Hindus,” he said adding: “Hinduism has survived many upheavals for thousands of years. Hinduism has never been endangered.”

Other speakers, lacking spiritual and academic pedigrees, drew on an arsenal of simulated anguish and simmering indignation.

The nuances of history pass lightly over the ferociously devout and it took little effort to pander to an aggravated sense of historical aggrievement.

At one of the debates, the mere mention of Jawaharlal Nehru, India’s first Prime Minister, elicited sniggers and boos. The speaker hinted at ‘Nehruvian socialism’ which had made the Indian economy a non-starter. He concluded with a coup de grace, to a standing ovation: “Nehru did not like anything Indian.”

The poet Rabindranath Tagore, who composed the Indian national anthem, had spoken of his vision of a country where the “clear stream of reason had not lost its way”. At some of the discussions, even the most indulgent observer would have been hard put to discern the stream of reason.

The image of a once great civilisation suppressed by a century of British rule and repeated plunder by invaders captured the imagination of many in the audience. Hanging above it all, like a disembodied spirit, was the so-called malfeasance of Nehru, the leader who had won the trust of Hindus only to betray them in the vilest manner.

These tortured souls would have been well advised to adopt a more holistic approach to Hinduism, and history, looking no further than Swami Vivekananda, who once said: “The singleness of attachment (Nishtha) to a loved object, without which no genuine love can grow, is very often also the cause of denunciation of everything else.”

Historians have informed us that Nehru preferred his father’s intellect over his mother’s tradition but he was never contemptuous of religion. While he undoubtedly felt that organised religion had its flaws, he opined that it supplied a deeply felt inner need of human nature while also giving a set of values to human life.

In private conversations some delegates spoke of how their America-born children had helped persuade them to drop their pathological aversion to gays and lesbians. Despite their acute wariness of perceived cultural subjugation, the irony was obviously lost on them that Article 377 of the Indian Penal Code,(which criminalises gay sex) recently overturned by the Indian Supreme Court, is a hangover from the Victorian British era-embodied in the Buggery Act of 1533.

In the face of the upcoming elections in the US, Congressman Raja Krishnamoorthi’s decision to speak at the conference was a political risk. With a newly energised political Left, even the perception of being linked with “fascist” or sectarian forces could be political suicide in the critical November elections. Despite vociferous appeals to disassociate himself from the Congress, Krishnamoorthi chose to attend.

“I decided I had to be here because I wanted to reaffirm the highest and only form of Hinduism that I have ever known and been taught — namely one that welcomes all people, embraces all people, and accepts all people, regardless of their faith. I reject all other forms. In short, I reaffirm the teaching of Swami Vivekananda,” Krishnamoorthi said.

Given the almost pervasive abhorrence of anything remotely Nehruvian among a section of the delegates, it was a revelation to hear the opinion of Dattatrey Hosable, the joint general secretary and second-in-command in the RSS hierarchy. Speaking on the promise of a newly-resurgent India, Hosable said in an interview to Mayank Chhaya, a local journalist-author-filmmaker: “A moment comes, which comes but rarely in history, when we step out from the old to the new — when an age ends, and when the soul of a nation, long suppressed, finds utterance.”

The quote is from Nehru’s famous Tryst with Destiny speech delivered to the Indian Constituent Assembly on the midnight of August 14, 1947 — proof, if any is needed, that the force of Nehru’s ideas can transcend one’s disdain of him.

(Ashok Easwaran is an American journalist of Indian origin. The views expressed are personal. He can be contacted at ashok3185@yahoo.com)