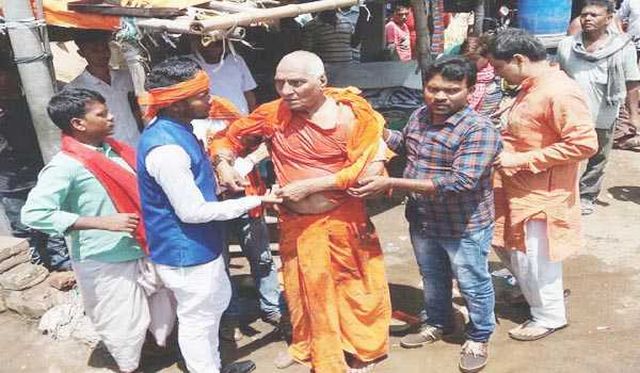 New Delhi: Civil society groups and activists on Wednesday have strongly condemned the ‘gruesome’ attack on 80-year old activist Swami Agnivesh allegedly by the Bharatiya Janata Yuva Morcha (the youth wing of the ruling Bharatiya Janata Party) members. They demanded that a fair probe in the matter should be convened at the earliest and the guilty should be booked for “this gruesome and brutal” attack.

In a statement, they said “We are shocked to learn about the brazen and shameful attack on eminent social activist Swami Agnivesh in Pakur of Jharkhand on the 17th of July. The murderous assault on Swami Agnivesh was allegedly perpetrated by the Bharatiya Janata Yuva Morcha (the youth wing of the Bharatiya Janata Party) members. What is even more shocking is that the State Spokesperson of the BJP P. Shahdeo while denying any role of his party-men in the attack has reportedly said that — “…considering his (Swami Agnivesh’s) track record this reaction doesn’t come as a surprise”. These words of the state spokesperson of the party give clear indication that the BJP as a party is creating an atmosphere where mob violence is increasingly been used as a means of imposing political will.

The continued impunity of the people who perpetrate the violence as well as those who have helped build this atmosphere of arbitrary aggression will only leave to a complete breakdown of law and order and constitutional values. These are not isolated cases but are spreading at an alarming rate across the country and must be immediately brought to a halt.

Swami Agnivesh’s offer to the Akhil Bharatiya Vidyathi Parishad and BJP Yuva Morcha members for a peaceful dialogue was ignored and a mob of over hundred people cornered the senior activist and pushed him to the ground and beat him up so badly that his clothes were torn as soon as he walked out of the hotel where he was staying.”

They also slammed the police saying “neither the police nor the district administration provided any security to the activist despite him providing them advance information about his arrival and the fact that a mob of ‘protestors’ had gathered outside his hotel well before the attack.”

An ironical and tragic coincidence is that the attack was perpetrated on a day when the Supreme Court severely condemned mob violence and lynching incidents and asked the Parliament to draft a law to punish offenders. It goes without saying that political violence by any group should not be normalised or deemed acceptable at any level.

They said that the attack also underlines the urgency of the members of the political class as also of the civil society to come together and make all efforts so that the forces of hatred and violence can be defeated and peaceful and democratic ways of political dialogue and dissent can be restored.

The statement was signed by Aruna Roy, Nikhil Dey, Shankar Singh and all members of the Mazdoor Kisan Shakti Sangathan, Rajasthan.