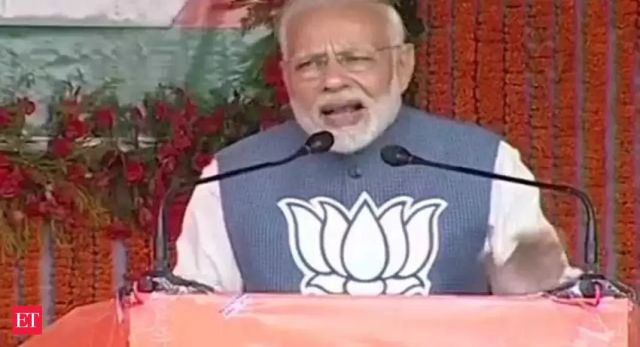 Ambikapur (Chhattisgarh) : Exploiting to the hilt Congress leader Shashi Tharoor’s recent remarks that a “chaiwala” became PM because of Jawaharlal Nehru’s commitment to democracy, Prime Minister Narendra Modi on Friday attacked the Congress saying it was not ready to credit people for this but only a dynasty.

He challenged the Congress to appoint someone from outside the Nehru-Gandhi family as party President for five years. He would then accept that Nehru had built a democracy legacy.

“Do a little thing, if you respect democracy. If a chaiwala or Modi became the Prime Minister because of your faith in democracy, policies, role in constitution and due to Nehru, make any good Congress leader the President of your party for at least five years.

“I will accept that Nehruji had such a commitment to democracy that has led to a dedicated Congress leader becoming the President of the party,” Modi said at a public meeting in Chhattisgarh’s Ambikapur.

The Prime Minister’s attack came after Congress leader Shashi Tharoor’s remarks while re-launching his book “Nehru: The Invention of India” on November 13 that a chaiwala became the Prime Minister because of Nehru’s policies and institution-building that provided for a democratic framework.

Modi said it will be good for the country if a person outside from the Nehru family became President of the Congress.

“I know it will be good when the country gets out of dynasty politics. But, they are not ready to give credit for this to the 1.25 crore people of this country that a chaiwala became the Prime Minister. They do not want to give credit to BJP and Modi. This is the result of their undemocratic thinking. For this too, they want to give its credit to Nehru,” he added.

UAPA is a menace to democracy: Shashi Tharoor on Kappan release