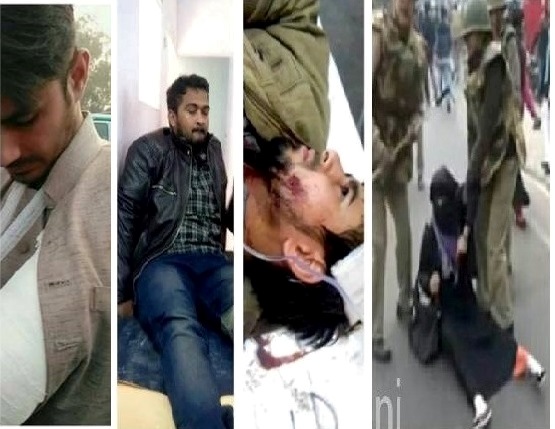 The saffron goons responsible for assaulting Najeeb remain scot free while those seeking justice for him have been beaten up and booked. In the historical Aligarh Muslim University (AMU) on Saturday, the police not only resorted to a lathi-charge against the protesting students but also lodged an FIR. The act of deploying several companies of RAF (Rapid Action Force) and PAC (Provincial Armed Constabulary) along with the police forces was aimed at creating an atmosphere of terror in the campus. As soon as the procession of protestors went off, demanding CBI inquiry into the Najeeb’s “mysterious disappearance”, the security forces began to lathi-charge, triggering a virtual stampede. Many protestors, in this crackdown, were severely injured and some of them sustained injuries on their heads. If the several videos viral on social media are anything to go by, the brutality of security forces is not only shameful but the police crackdown reveals again the deep-rooted prejudice against Muslims.

The communal-approach of the police does not structurally change with the change of political regime. While the police under the rule of the so-called secular government in the UP showed no mercy upon the AMU protestors, the Delhi police under the control of the Hindutva Modi Government recently kept on raiding JNU hostels for several days. Last week JNU saw the deployment of huge police personnel within the campus. The police justified its “search oppression” inside the campus on the pretext of finding Najeeb but they ended up harassing the students, particularly those from minorities and deprived sections. In one such incident, the some police personnel entered my friend’s room in Brahmputra Hostel and asked him to open his cupboard as if Najeeb was sitting right there. In another friend’s room, the police asked him to open his carton. Was Najeeb hiding in the carton?

Ever since Najeeb’s disappearance reported on October 15, following the acts of brutal violence overnight against him by the students having links with RSS-affiliated ABVP, the trio of the police, JNU administration and the Hindutva government have been in a state of callousness and inaction. Instead of bringing Najeeb back and punishing the culprits, the ruling classes are using his case as an opportunity to erect more barricades within the universities and are trying to take back any democratic space left. Much more than anyone, the BJP, which is facing people’s ire due to demonetization, is trying to polarise voters around Najeeb issue ahead of the upcoming UP assembly elections. With the help of a sizable section of media, the BJP is trying to spread the romour that Najeeb had links with “anti-nationals”. Moreover, Saturday’s protest at AMU is being propagated as acts of “lawlessness” by “unruly Muslim” students.

(Abhay Kumar is pursuing PhD at Centre for Historical Studies, New Delhi. He may be contacted at debatingissues@gmail.com)