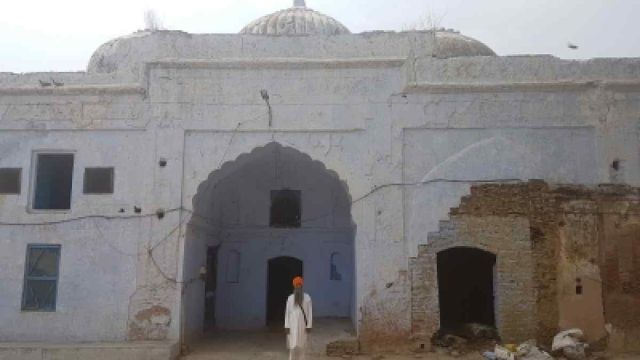 Fatehgarh Sahib (Punjab) : This town of sacred pilgrimage in Punjab has been witness to one of the most tragic, painful and violent chapters of Sikh-Mughal history going back three centuries. Despite that, a 350-year-old mosque not only stands in complete harmony with a recently completed gurdwara but is looked after by the Sikh priest.

Chittian Masjidan (White Mosque), with its three white-washed domes, can be seen from a distance amidst the agricultural fields of Mahadian village. A few Mughal-era structures still dot the countryside here even as the area is dominated by Sikh shrines, the largest one being the main Fatehgarh Sahib gurdwara to which Sikh pilgrims come from all over the world.

What is unique about the mosque is that it stands just a kilometre away from the spot where the two young sons of the tenth Sikh master, Guru Gobind Singh – Fateh Singh (7) and Zorawar Singh (9), were buried alive in 1705 by the Mughal commander Wazir Khan, who was the Nawab of Sirhind, a town five km away, because they refused to convert to Islam as per the diktat of the Mughals under the reign of Emperor Aurangzeb.

The name of Fatehgarh Sahib comes from the name of the youngest son, Fateh, of the guru. The town, around 45 km from Chandigarh, is a great draw especially during the annual Jor Mela fair to commemorate the martyrdom of the young ‘sahibzadas’ (sons of the guru).

The tragic and violent history, however, has not stopped Jeet Singh, a granthi (Sikh cleric) of the Mastgarh Sahib Chittian gurdwara from maintaining the mosque’s ancient structure.

“I have been maintaining the (mosque) building for the past four years. It was in a very bad shape when I came here. I clean it from inside daily even though no Muslims (who live in nearby villages) come here for prayers,” Jeet Singh told IANS, standing in front of the partially dilapidated structure.

Jeet Singh said that the mosque, which is believed to be over 350 years old, was abandoned for a number of years till a Sikh religious leader of the area, Arjun Singh Sodhi, got the Guru Granth Sahib, the holy book of the Sikhs, kept inside. For nearly a century, the mosque building was used as a gurdwara.

“The Sangat (Sikh community) then decided to build a new gurdwara in the same complex as this (mosque) building was getting old and cracks were appearing on its walls and domes. The gurdwara is now complete and Guru Granth Sahib has been kept there. With whatever means, we try to maintain the mosque building and keep it clean,” Jeet Singh, 43, who shifted here four years back, said.

The mosque and gurdwara stand side by side in perfect communal harmony within the four walls of the complex. The mosque building gets a periodic whitewash and minor repairs, if required. There is nothing kept inside the structure.

“I have researched the history of this place, talking to old people (Muslims, Sikhs and others) of the area. The qazi (Muslim cleric) of this masjid (mosque) is said to have issued the fatwa (a religious edict) condemning the young sahibzadas to death. However, he is believed to have opposed the move initially saying that the children were too young for the ruthless punishment,” said Jeet Singh, who is in charge of the complex along with Hakam Singh (senior in-charge).

He says that the Muslims of the nearby area of Bassi Pathana had objected when the mosque was initially used as a gurdwara in the beginning of the 20th century. However, the then Maharaja of Patiala came to the place and resolved the matter and the gurdwara continued in the old structure for a number of years.

“A number of Muslims live in nearby villages but they have their own mosques. No one comes here for prayers but we don’t stop anyone. We have respect for all religions,” Jeet Singh, a soft-spoken man who lives in the complex with his wife and two children, said with a smile.

Historians believe that the mosque dates back to the period of Mughal emperor Shah Jahan and was built between 1628 and 1658.

The mosque structure survived the fury of the Sikh-Mughal battles. Even though the Sikhs defeated Wazir Khan in 1710 and re-claimed the area, the mosque survived the onslaught and today stands as silent testimony to communal fraternity in troubled times.

(This weekly feature series is part of a positive-journalism project of IANS and the Frank Islam Foundation. Jaideep Sarin can be contacted at jaideep.s@ians.in)