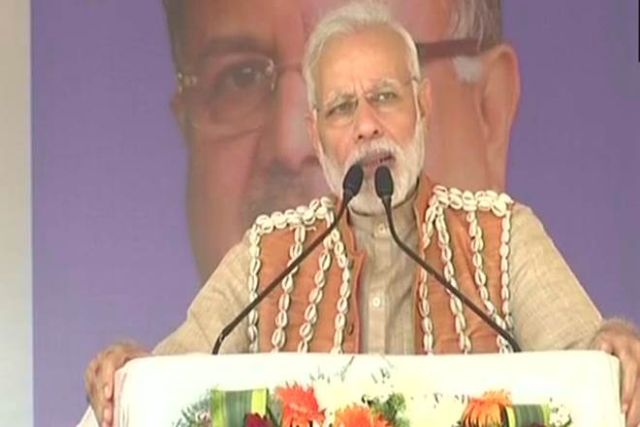 Bhilai (Chhattisgarh) : Development is the only and best answer to every form of violence, Prime Minister Narendra Modi said here on Thursday as he inaugurated several projects for Chhattisgarh worth thousands of crores of rupees.

“The mention of Bastar used to invoke images of guns, bombs and violence. Today, this region is known for Jagdalpur airport. I believe that to every form of violence there is only one reply and it is development,” Modi said addressing a gathering after flagging off the first flight between Jagdalpur and Chhattisgarh capital Raipur.

He said in the region where the previous governments did not dare to build even roads, the Bharatiya Janata Party (BJP) governments of the Centre and the state have built an airport.

Modi said an increasing number of youth from the Bastar region were shunning violence and coming to the mainstream.

“Now, the travel time between Raipur and Jagdalpur will be shortened to just 40 minutes from the earlier 6-7 hours. Thanks to the policies of our government, today more people are flying than those travelling in trains’ AC coaches,” Modi said.

The Prime Minister said the increased connectivity will attract industry, give a boost to employment and as a result will generate more employment.

Earlier, Modi also dedicated the modernised and expanded Bhilai Steel Plant to the nation and distributed laptops and cheques to beneficiaries.

He said peace, stability and law and order were the prerequisite for development and the BJP government in Chhattisgarh led by Chief Minister Raman Singh had provided that and embarked the state on the path of progress.

The Prime Minister said his government altered the laws to make sure a certain part of the income from the minerals extracted from Chhattisgarh is spent on the welfare of the people including the Adivasis.

Targetting the political rivals, Modi said the previous Congress-led UPA government did not approve the project of an Indian Institute of Technology (IIT) in Bhilai as mooted by the Raman Singh government.

“Today, we have laid the foundation stone of an IIT campus in Bhilai,” Modi, who is on a day-long visit to the state, said.