New Delhi: Renowned Islamic scholar and analyst, Dr. Javed Jamil has called upon the world Muslims to launch a campaign against “Corporate-sponsored Sexual Freedom”. He was delivering a talk on “Sexual Crimes: Problem and Solution” at Jamaat Islami Headquarters in New Delhi on Saturday, 26th December, 2015. 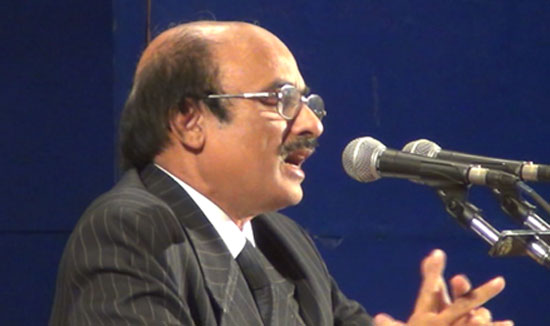 He said that “the world today is ruled by the forces of economic Fundamentalism” and all the global social philosophies have been developed in accordance with their diktats. He said that “the corporate-sponsored feminism was nothing but a ploy to use women as commercial beings so that the sexual attraction between men and women can be utilised for the interests of the market.” He said that “God had created Sex as the cause of life in the world but thanks to the designs of merchants of sex, sex is now more associated with death than life.” He told that sex has become the biggest killer of the world with more than 40 million deaths due to AIDS in last two decades and “5 million human babies are aborted every year due to wanton sexual behaviour of human beings”

Dr. Jamil lambasted West for its bombastic claims of giving women freedom and said that West has in fact harmed women more than any other civilisation in the past. Giving statistics of the rapes he told that out of more than 300 thousands rapes every year, more than 90 per cent are committed in the countries like America, South Africa, Australia and England. He told that Muslim countries can rightly boast of minimum rates of sexual crimes against women.

He said that the rise in the incidence of rapes directly owes to the absence of deterrent laws and intense provocation. “Provocative materials inciting sexual passion abound all around, and the dressing styles of women hardly helps.” Talking on the on-going debate on the age of juveniles, he said “if a person has committed rape, it alone is an enough proof of his being a biological adult, and that should remain the only criterion of adulthood.” He said that despite Alcohol being the biggest factor in almost all crimes including murders and rapes, suicides and road accidents, no one is ready to discuss it in the media.

Dr. Jamil expressed disappointment at the inability of Islamic scholars and organisations in making the issues of morality and social vices a global movement. He said that “95 pc of Indians believe in religious morality, family and social values” and there should be no reason “why attempts should not be made to mobilise all of them against “the forces that commercialise human weaknesses including sex”.

Dr. Jamil told that he is preparing a plan to launch a nationwide movement against what he called “Dangerous Economics” soon.