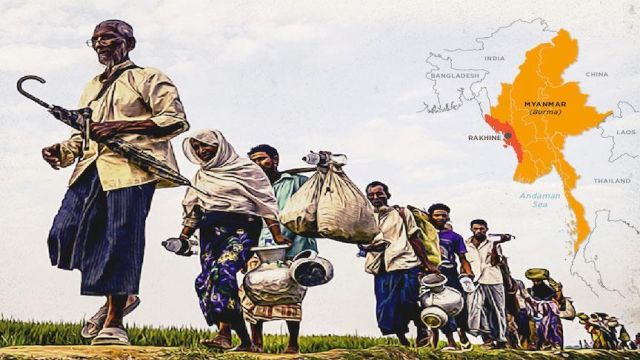 Since late August, 656,000 Rohingya refugees have fled to Bangladesh to escape persecution

By Dildar Baykan and S.Ahmet Aytac,

Ankara : Rohingya Muslims have been suffering since Aug. 25 when ethnic cleansing by the Myanmar military started.

The attacks came hours after a commission led by ex-UN chief Kofi Annan urged the government to end restrictions on Rohingya Muslims in Rakhine.

After a year-long inquiry, the commission called for “urgent and sustained action on a number of fronts to prevent violence, maintain peace, foster reconciliation and offer a sense of hope to the state’s hard-pressed population”.

Turkey condemned the deadly attacks right away in a statement, where the Foreign Ministry emphasized that “the problems in Rakhine state cannot be resolved through violence”.

The statement said it was saddening that the attacks happened at a time the report of the Kofi Annan-led Rakhine Advisory Commission was released. 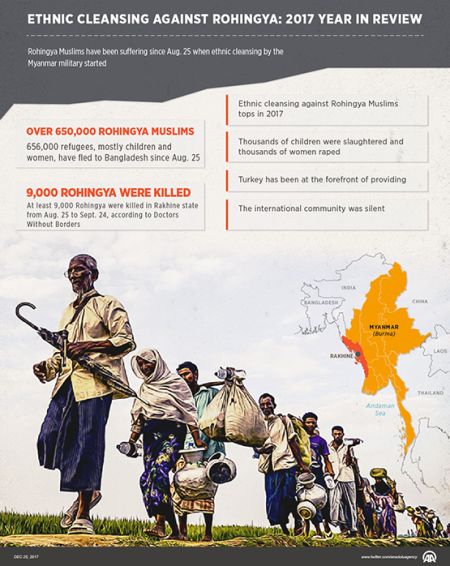 Myanmar military forces have committed widespread rape as part of a campaign of ethnic cleansing against Rohingya Muslims in Rakhine State, according to a Human Rights Watch report in November.

The organization interviewed 52 Rohingya women and girls who fled to Bangladesh, 29 of whom said they had been raped and three of the girls were under 18 years of age. Many women described witnessing the murders of their children, spouses, and parents, the report said.

One of the teenaged victims said soldiers had stripped her naked and dragged her from her home where 10 soldiers raped her.

They handed out aid to Rohingya Muslim refugees at a camp near the Myanmar border.

Other Turkish agencies, including the Disaster and Emergency Management Presidency (AFAD), the Turkish Red Crescent and the IHH Humanitarian Relief Foundation, followed suit.

Myanmar and Bangladesh signed an agreement on Nov. 23 for the repatriation of Rohingya Muslims who have crossed the border.

The Arrangement on Return of Displaced Persons from Rakhine State was signed after a two-day meeting in Myanmar’s capital.

Leading rights group and representatives of the Rohingya Muslims voiced concern over the lack of an international monitor for the repatriation of Rohignya refugees to Myanmar. They fear that refugees will be repatriated to the troubled Rakhine state.

Pope Francis visited the region at the beginning of December. Pope Francis called for respect for the rights of all of Myanmar’s ethnic groups, but disappointed human rights activists by failing to directly mention the persecuted Rohingya Muslims.

In a speech in Myanmar’s capital Nay Pyi Taw, he referred to the ongoing suffering of Myanmar’s people “from civil conflict and hostilities”.

Francis made no mention of the Rohingya or the crackdown in Rakhine, which has been condemned by the UN and the U.S. as “ethnic cleansing”.

During his visit at the Mainnaghota refugee camp, he urged a global campaign for Rohingya Muslims

He thanked the Bangladeshi government for its efforts, support, and cooperation over the Rohingya issue.

According to the UN, 656,000 refugees, mostly children and women, have fled to Bangladesh since Aug. 25 when Myanmar forces launched a crackdown on the minority Muslim community.

In a report published on Dec. 12, the global humanitarian organization said that the deaths of 71.7 percent or 6,700 Rohingya were caused by violence. They include 730 children below the age of 5.