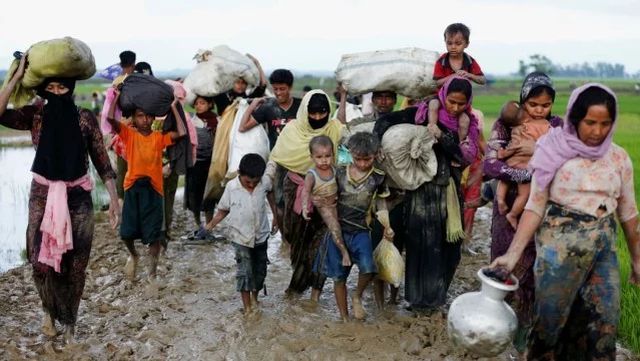 Nay Pyi Taw : The ethnic cleansing of the Rohingya Muslim minority in Myanmar is continuing in Rakhine state, from where at least 700,000 people have fled to Bangladesh since August 2017, the UN said Tuesday.

The UN and human rights organisations have repeatedly criticised the atrocities allegedly committed by the Myanmar military in a campaign against the Rohingya that began in northern Rakhine following a coordinated assault by the Rohingya insurgent movement on August 25, 2017, reports Efe news.

UN Assistant Secretary-General for Human Rights Andrew Gilmour said that while the level of violence had been reduced, murder, rape, torture, abductions as well as forced starvation continued.

“It appears that widespread and systematic violence against the Rohingya persists,” Gilmour said in a statement issued after his visit to refugee camps in Bangladesh.

“The nature of the violence has changed from the frenzied blood-letting and mass rape of last year to a lower intensity campaign of terror and forced starvation that seems to be designed to drive the remaining Rohingya from their homes and into Bangladesh,” he added.

The UN expert also questioned how the Myanmar government could say that it was ready for the return of the Rohingya refugees while atrocities committed against them continued, and argued that “safe, dignified and sustainable returns are of course impossible under current conditions”.

Gilmour also praised the humanitarian response of Bangladesh and other international organizations to the Rohingya refugee crisis, but warned that the rainy season could leave “a devastating effect” on the refugee camps.

Bangladesh and Myanmar signed an agreement to start repatriating the Rohingya refugees at the end of January but the deal was suspended at the last minute by the Dhaka government.

The Myanmar military has denied claims of abuses, but in January recognised the extrajudicial killings of Rohingya in September 2017.

Myanmar does not recognize Rohingya as its citizens, arguing they are illegal immigrants from neighbouring Bangladesh, which has led to continued discrimination against the Rohingya community as well as restrictions on their freedom of movement.