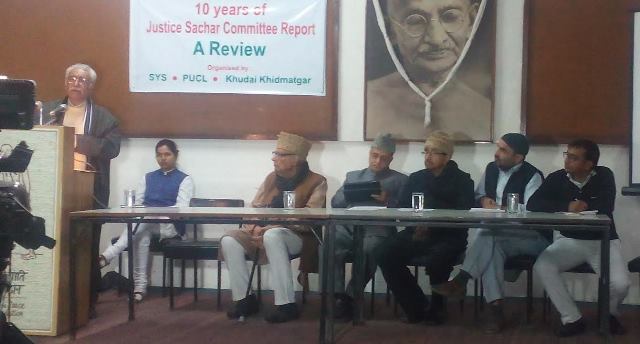 New Delhi:   Reviewing the 10 year progress of the  Sachar Committee report’s implementation in the presence of Justice Rajendra Sachar,  eminent scholars, Muslim representatives and  members of the  Sachar Committee  said that  its major and critical recommendations  such as Equal Opportunity Commission (EOC),  Diversity Index, De-reservation of Muslim-dominated constituencies,  Amendment in the  Article 341, Indian Waqf Service  and compensation for terror exonerees etc   still remained in cold storage.

Speaking at a seminar on “the Justice Sachar Committee Report: A Review After 10 Years’, here on Thursday, they underlined the fact that the minorities, especially the largest minority (Muslims), have been the ignored factor by all Central Governments.

The Prime Minister’s High-Level Committee headed by Justice Rajindra  Sachar was constituted in 2005 by the then Prime Minister of India Dr. Manmohan Singh to prepare a report about the social, economic and educational status of the Muslim community in the country. The findings and recommendations of the report immediately became a topic of sharp debate in political, social and intellectual circles as it was presented in the Lok Sabha on November 30, 2006. The 403-page report, which considered being a mirror showing the true picture of the Muslim community, consequently, received praise from a large part of intelligential as well as from political parties.

To mark this occasion, Socialist Yuvjan Sabha (SYS), People’s Union for Civil Liberties (PUCL) and Khudai Khidmatgar have jointly organized the seminar in which a review of the implementation carried out by central and state governments in the last 10 years was taken.

In his opening remarks, veteran journalist and former MP Kuldip Nayar said that the present government has been openly propagating Hindutva and religion has been overriding politics.

Today Muslims feel the threat to their life and property and they are being treated badly, Nayar said and added that they (Hindutva forces) will not succeed in turning the nation into a Hindu Rashtra.

In his eloquent power-presentation, Dr. Zafar Mahmood has bared all humbugs of the successive governments with regard to the Sachar recommendations.

Not a single major recommendation has seen the light so far that would have brought a palpable change in the condition of the Muslim community, said Dr. Mahmood who was OSD in the Sachar Committee.

He said Muslims are going down in various fields of development because of very low presence in Governance adding that the root cause of very low Muslim representation in Parliament, Assemblies and Local Bodies is the basic systemic defect. In correspondence to the share of their population, there should be 77 Muslim members in the Lok Sabha but their average strength remained 25 since first general elections in 1952.

He said Muslim predominant constituencies of Parliament and Assemblies are reserved for Scheduled Caste so as Muslim cannot enter in legislatures. He highlighted some glaring examples of this systemic bias. For example, Lok Sabha Constituency Karimganj (Assam) has 52.3 % while SCs are 12.95 %, Nagina Assembly seat (UP) has 64% Muslims while SCs 12%. In contrast, Tufanganj (West Bengal) has   53 % SCs while Muslims are 16% but it was not reserved for SCs.

He said the Sachar committee has strongly recommended of making Scheduled caste definition religion-neutral and it would have been done merely by passing a resolution in the Parliament but it did not happen. Same the case of other important recommendations that would have brought real change in the overall condition of Muslims but no governments seem to be sincere about it, he added.

Another member of the Committee Prof. T.K. Oomen said inequality and politics of segmentization is a phenomenon in India. For this course correction, the Sachar Committee has recommended setting up of a Diversity Index but neither central government nor state governments have shown any interest in this connection, he said.

Prof Prem Singh stressed that the Sachar Committee report is not for only Muslims but for the whole society and the central as well as state governments should implement the report in a holistic manner.

The seminar also passed a number of resolutions. It said amongst the various recommendations, Sachar Committee had recommended the establishment of Equal Opportunity Commission (EOC) as an instrument to prevent discrimination against minorities in the private sector like housing, employment (since courts cannot interfere in cases of discrimination in private sector). This recommendation has been inexcusably violated and also remained in cold storage.

The EOC can be set up by the state governments without taking permission from the Central government. Hence this seminar resolves that the present state governments run by secular parties should immediately establish the EOC in their respective states.  It also urged the government to set up Delimitation Commission to deal with the unfairness of divisions of electoral constituencies which results in lesser number of Muslims in legislatures.