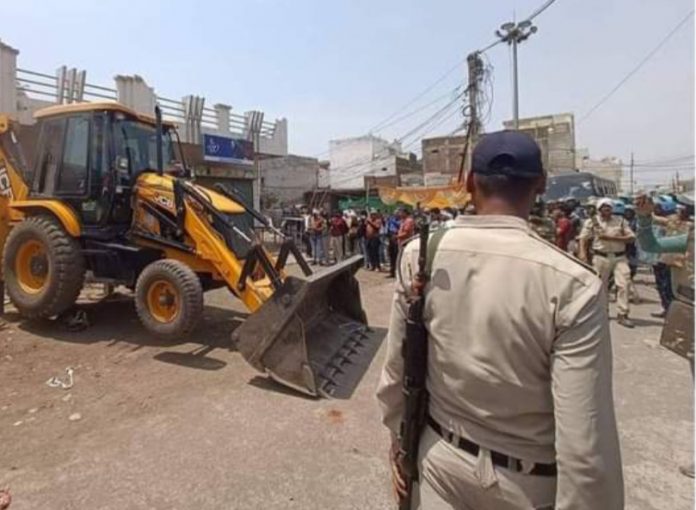 Bhopal: BJP-led Madhya Pradesh government and district administration were directly responsible for communal violence in Khargone town of the state during Ram Navami, according to a fact-finding mission made up of leaders from eight political parties that visited Khargone on April 25.

The Fact Finding report underlined that despite intelligence warning, the administration allowed a rally in sensitive localities without permission. It also demanded that the Central Bureau of Investigation investigate Ibris Khan’s killing.

The team also claimed that the action had been primarily one-sided, and that police had failed to restore peace 15 days after the incident.

“The officials holding constitutional posts are breaking every law of the rulebook. First they allowed a rally without permission despite the input of a clash, by intelligence. The rally which should have left Talab Chowk Masjid Square at around 3 pm stayed there till 5 pm and provocative songs were playing in front of the mosque,” said Jaswinder Singh, state secretary of the Communist Party of India (Marxist) who headed the fact-finding team.

Over a half-dozen examples of right-wing Hindutva organisations and the BJP attempting to incite Muslims in Khargone have been documented in the last year, he claimed.

The fact-finding team released a 16-page report on Wednesday, April 27, at a news conference in Bhopal, stating that the Muslim community had been subjected to continual provocations in the previous year.

The fact-finding mission said that all the residences and shops demolished by the state after the Khargone violence belonged to Muslims. “Political pressure led to the demolition of a few stores in Choti Mohan Talkies and Aurangpura Square that had nothing to do with the incident,” Singh continued.

“The four Hindu shopkeepers who were renting from the Talab Chowk Masjid Committee, were allowed to empty their shops before the demolition while their Muslim counterparts were shouted at and sent away,” the team said.

Swarup Nayak, a member of the fact-finding team and a member of the Rashtriya Janata Dal (RJD), compared the manner the government and officials targeted and labelled a particular population for the clash to Hitler’s treatment of Jews.

The fact-finding report accused the BJP of causing unrest in the Khargone and Barwani districts in order to polarise voters after losing nine out of ten seats in the 2018 assembly elections.

The fact-finding team’s joint statement is as follows:, “The violence was deliberately stirred and the reason was political. They said there are 10 assembly seats in Khargone and Barwani (the other district that saw riots on Ram Navami in Sendhwa block). If the results of past four assembly polls are analysed, it could be seen that in 2003, 2008 and 2013, the BJP won six to seven of these 10 seats. However, in 2018, the BJP lost nine of the 10 seats (and also lost the polls with a slim margin). It is this defeat that the BJP is not able to digest and therefore it is conspiring to cause communal polarisation to win the (2023) polls.”

According to CPI(M) leader Singh, the BJP carried out a victory procession in Khargone after winning four state legislature elections on March 10. Crackers were hurled inside the Talab Chowk Mosque during the ‘Vijay Yatra.’ Despite the Mosque committee filing a police complaint, Singh claims that no action was done.

“Even two weeks after the tragedy, the hate mongering and targeting of a certain community continues unabated,” the team claimed, blaming the district administration and state home minister Narottam Mishra for failing to restore peace in the region even after 15 days. People are openly rejecting Muslims in a number of videos and images that have surfaced. Relief work has yet to commence, and religious sites are still under lock and key.”

The fact-finding team questioned why the police kept the death of Ibris Khan, the first casualty of the clash, from his family until April 18 when they had retrieved his body on April 11 itself.

“Even the home minister Narottam Mishra and Chief Minister Shivraj Singh Chouhan were kept in the dark about Ibris’s death. It was on April 15 when they got official communication about his’ death,” said Singh.

Despite the brief postmortem report proving homicide, the fact-finding team wondered why police did not file a murder case and instead filed a case of “unnatural death.”

“We registered a murder case on April 14 at 11:57 pm under sections 302 and 34 of the IPC when the autopsy report of unidentified man confirmed homicide,” said SP Keswani. According to police, it was still an unidentified body although, almost 12 hours earlier, Ibris’s brother Ikhalq had filed a missing report with his mother in the same Kotwali police station.

“For the next three days, police neither informed Ibris’s kin nor the media that they had found an unidentified body which is an standard procedure in missing cases and unidentified dead bodies,” said Yash Bharti, a member of the fact-finding group.

The third and most important question raised by the fact-finding team is related to establishing Ibris’s identity. According to the FIR, police tried to find the whereabouts of the deceased man in the locality for days but “did not find anything.”

“Ibris’s body was found roughly 300 metres away from his house,” the fact-finding report said. Everyone in the neighbourhood knew he was missing, and his family was desperately looking for him. What procedure did the cops use to locate the body? Who did they inquire about? Had the unidentified body been reported to the media? Why did they keep Ibris’ death a secret for five days from the chief minister and the home minister?

“On the one hand, police informed the home minister and the chief minister of Shivam Shukla’s head injury and SP Siddhart Choudhary’s leg injury,” Singh said. Police, on the other hand, kept Ibris’ body hidden for eight days.”

The report concludes that concealing Ibris’ death for a week served the government’s goal of pursuing a witch hunt against a certain group. “If the news of Ibris’ killing was leaked on the first day, the BJP government and the police would be on the defensive.” “They may not have been able to demolish the Muslim community’s homes and shops, nor have they been able to carry out one-sided action,” Singh added.

Shailendra Sahily of the Communist Party of India, Raju Bhaatnagar of the Nationalist Congress Party, Pradeep Khuswaha of the Samanta Dal, Ajay Shivastav of the Loktantrik Samajwadi Party, Devendra Singh Chouhan of the CPI (ML), and Yash Bharti of the Samajwadi Party are among the eight members of the fact-finding team.