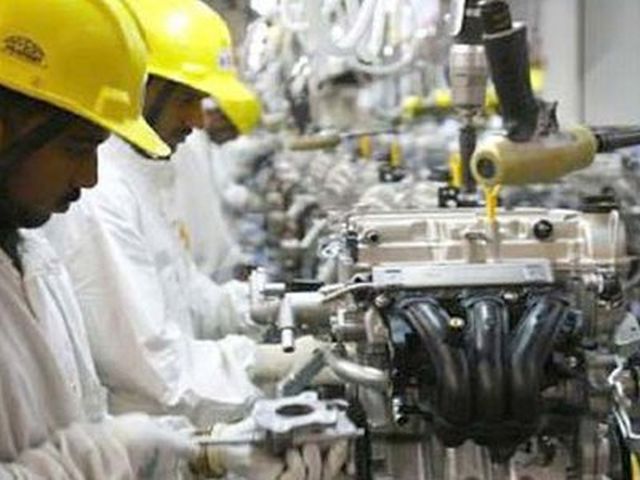 New Delhi : As manufacturing picked up pace, India’s factory production growth in January at 7.5 per cent doubled over the 3.5 recorded in the same month last year, even as retail inflation eased in February, official data showed on Monday.

Industry welcomed the “pick-up in growth trajectory” witnessed in the beginning of the calendar year.

The Index of Industrial Production (IIP), however, rose marginally over the 7.1 per cent registered in December 2017, a Central Statistics Office (CSO) release said here.

The cumulative IIP growth for the April-January period of the current fiscal, at 4.1 per cent, was lower than the 5 per cent posted in same period of 2016-17.

In line with the recent trend of recovery in manufacturing, the sector, which constitutes 77.63 per cent of the index, grew by 8.7 per cent during January, as compared to 2.5 per cent in the same month last year.

Retail inflation for February eased down to 4.4 per cent, compared to 5.07 per cent in the previous month. The consumer price-indexed (CPI) inflation was 3.65 per cent in February 2017.

Inflation softened last month mainly on account of cheaper food prices and lower cost for fuel. Inflation rate in the consumer food segment was lower at 3.26 per cent, as compared to 4.7 per cent in January.

The January IIP was also boosted by a higher offtake of consumer and capital goods.

Capital goods output in the month under consideration increased sharply by 14.6 per cent, as against a fall of 0.6 per cent in January last year.

Consumer durables recorded a growth rate of 8 per cent as against a decline of 2 per cent in the same month a year ago.

The mining sector, however, registered negligible growth of 0.1 per cent, as compared to 8.6 per cent rise in January last year.

During January, 16 out of 23 industry groups in the manufacturing sector showed positive growth.

Commenting on the IIP numbers, industry chamber Assocham described these as signs of “an underlying pick-up in the growth trajectory”.

“It would be safe to assume that a lot of advantage has accrued because of the low base effect of the previous year when the growth had plunged following the demonetisation, said Assocham Secretary General D.S. Rawat in a statement.

On retail inflation, “the undercurrent remains biased on the upside, making RBI disinclined towards any rate cut”, he said.

Deloitte India Lead Economist Anis Chakravarty said: “Overall, the latest IIP data points towards signs of economic recovery as the negative effect of the disruptive shocks of last year appear to be on the wane. However, the momentum of the recovery needs to be sustained through effective implementation of the structural and infra related reforms.”