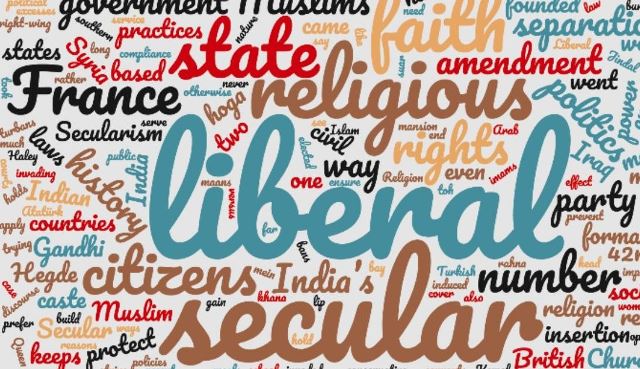 It is said that if someone is deeply religious, he cannot be a secular at the same time, because according to their views faith is against secularism and while being a religious person, no one can be a secular therefore secularism and religion can never go hand in hand. But the question is whether the religion is against secularism or not? We critically analyze this in the view of historical background and constitutional provisions.

Great Ashoka also advocated religious tolerance, and later on, the religious policy of great Akbar was totally based on religious tolerance and respect of all religions and religious teachings and principles. At the time of struggle of Indian independence, the people of India irrespective of their religion, caste, class, community and language, they unanimously strived consistently while having strong courage and passion to get India free from the clutches of British. They sacrificed their lives but did not accept the slavery of English and as a result, they snatched India from their hands.

Scope of secularism in the constitution of India: – At the time of the framing of Indian constitution, our forefathers and great leaders opposed religious fundamentalism and they were in favour of the formation of secular state as the first prime minister of India, Jawaharlal Nehru and father of nation Mahatma Gandhi were also in favour of secular state. Mahatma Gandhi considered religion as a personal matter.

As S. Radhakrishnan said “secularism is not anti-god nor anti-religion, it is an equal treatment with religions “. Secular does not mean only religious tolerance but religious tolerance is a negative way and the positive way of secularism is to respect all religions and religious teachings. To think that our religion is best religion, is not against secular nature rather than it is a secular outlook. For instance we love our mother and we also love mothers of others but we do not put others’ mothers in the place of our mother nor do we hate the mothers of others. So if someone is thinking that his/her religion is best religion it does not mean that he / she will disrespect other religions and religious teachings and values.

What type of secularism?

If you talk about religion and to be a religious person in a secular state, some people argue you that what type of secularism you are talking about? They must understand that secular state is not a godless state nor an anti- religion state as well as our constitution is not a rigid constitution. It guarantees the protection of certain fundamental rights. They are given in articles 12 to 35, in Part III of the Constitution. Among them articles 25 and 26 are the two central articles guaranteeing religious freedom, and protection of faith.

Article 25 (1) states Subject to public order, morality and health and to the other provisions of this Part, all persons are equally entitled to freedom of conscience and the right freely to profess, practice and propagate religion.

Article 26 reads: Subject to public order, morality and health, every religious denomination or any section thereof shall have the right – (a) To establish and maintain institutions for religious and charitable purposes; (b) To manage its own affairs in matters of religion;. that means you can freely profess, and practice any religion which you feel best and you can be a deeply religious and at the same time equally secular because secularism is not anti- religion nor the religion is against secularism and it is also not a conflict to secular nature, as well as you can also propagate your religion through writing articles, publishing books and through delivering speeches in gatherings, and by doing good deeds these all are protected under Article 25 of Indian Constitution. Nature of state in a secular country Secularism has been one the essential elements in the basic structure of our constitution. It defines relationship between state and religion that state has no official religion.

Justice V.M. Tarkunde said that “the concept of secular state does not merely imply that the state will be impartial to all religions; it implies that the state will have nothing to do with religion”. In one important judgment given by the Supreme Court of India viz. Kesavananda Bharati vs. Kerala case which was decided by a full Constitutional bench of judges on April 24, 1973.

By a water-thin majority of 7-6, the Supreme Court held In identifying the features, which are fundamental and thus non-amendable in the constitution was this statement –A secular State, that is, a State in which there is no State religion “,and it is the duty of the state to protect and secure the life, liberty and property of all the citizens of country, moreover the state will not discriminate among citizens on the grounds of religion, language and so on, but it will treat equally among all citizens in the matter economic and social etc as it was laid down under Article 15 and 16. Article 15 – reads “prohibition of discrimination on grounds of religion, race, caste, sex, or place of birth”. Article 16 – says “equality of opportunity in matter of public employment”.

Therefore it is a fundamental part of Indian political system to secure the socio-economic rights of citizens for their moral and economic prosperity. It is another thing that even though the word ” secular ” was ascertained in the preamble but it did not change the mindset of Indian people and their practices. Special right for minorities in a secular state Many people say that to grant special right for minorities in a secular state is against the secular nature of India .so they must remember that secularism came from western concept and it is a materialistic concept there, but in India, it is different and is not against secular nature of the country that’s why it is said that Indian secularism is an unique secularism and the special right was given for minorities under constitutional provisions as it was guaranteed under Art- 30 (1) And (2) of Indian constitution .

It reads (1) All minorities, whether based on religion or language, shall have the right to establish and administer educational institutions of their choice. (1A) in making any laws providing for the compulsory acquisition of any property of an educational institution established and administered by a minority, referred to in clause (1) the state shall ensure that the amount fixed by or determined under such law for the acquisition of such property is such as would not restrict or abrogate the right guaranteed under that clause. (2)

The state shall not, in granting aid to educational institutions, discriminate against any educational institution on the ground that it is under the management of a minority, whether based on religion or language. And this special right was not given for minorities to have a kind of privilege but it is to give a sense of security and a feeling of confidence and it is not to create inequality among the citizens but to bring equilibrium among them all.

Only the minorities were intended to protect their right to establish and administer educational institutions by this Article 30 of Indian constitution. Essence of democracy By being a member of particular religion, one cannot be less Indian and by being a member of another particular religion, one cannot be more Indian. For instance if someone belongs to Hindu religion, so he is a better Indian and another belongs to Islam, so he is less Indian.

No never, it is not religion that determines our patriotism; it is our behavior, our activities that determine our patriotism. Whether I belong to Muslim religion, and he belongs to Hindu religion, whether you belong to Sikh religion and they belong to Christian religion, everyone has to be taken care, irrespective of religion, language, caste, class, birth and others, because India belongs to each of them equally. As an Indian we also have a duty to take care of everyone of society that is the essence of democracy. Specially minorities are being crushed and deprived from their rights which are a challenge for Indian democracy and a kind of danger for Indian secularism.

So to provide justice, equality, liberty and a good social stratification, there is need to eradicate communal elements and strengthen secular nature of India which is being weakened by politicization of caste, and religion by political parties for their political purpose, that is causing great harm not only for democratic and parliamentary form of the government but also affecting our “unity in diversity”. Therefore the time has come to spread secular values and secular outlooks in order to eliminate communal elements and to remove dictatorship to save democracy and to preserve unique secularism of India.

(Yaqoob Murtaza is a student of law at Aligarh University)