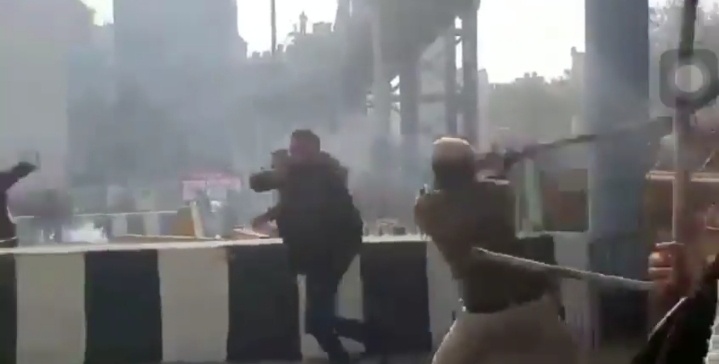 New Delhi , Jan 26:  Chaos and ruckus was reported from various parts of the border areas of Delhi on Tuesday as the protesting farmers entered the national capital defying the agreement of the scheduled time of tractor rally and creating multiple fronts at Karnal Bypass, Mukarba Chowk, Transport Nagar, Akshardham, Gazipur and Tikri border.

Thousands of farmers marched into the national capital on foot and riding tractors, even as the paramilitary forces and Delhi Police personnel kept a wary eye on the evolving situation.

The police had to resort to tear gas shell firing and mild lathi-charge to contain the tractor rally and the protesters who have defied the agreement with authorities and police of three states — Delhi, Haryana and Uttar Pradesh. Several policemen and protesters were also injured in the tractor rally that turned violent on Tuesday.

Visuals of men riding horses were seen at the Karnal Bypass as visuals of protesters breaking barricades at Singhu, Gazipur and Mukarba Chowk emanated.

The Delhi Police, who had made elaborate security arrangements, were caught off guard as the protesting farmers went berserk breaking the window panes of the trucks and trolleys kept by police to restrict the movement of the farmers inside the national capital.

On Sunday, Delhi Police had allowed the tractor rally after the annual Republic Day parade.

Earlier, during the talks with the police, the protesters were told they could not disrupt the celebrations at Rajpath even as the farmers insisted their parade would be “peaceful”.

However, going back on their promise, the farmers broke barricades and started the rally much before the scheduled time. IANS