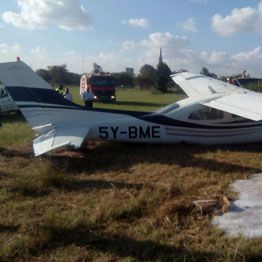 Nairobi, Jan. 3 : Three passengers and a pilot on Saturday escaped narrowly after a private light aircraft crash landed in Nairobi near Wilson Airport, one of the busiest airports in east and central Africa.

CID commander in charge of airports Joseph Ngisa said the pilot, Captain Simon Herd, was flying with his family from Kijipwa in Kilifi County in the coastal region when the plane crash-landed.

“No injury was reported as all the occupants of the plane disembarked from the plane after landing in the field,” Ngisa.

Witnesses said the Cessna 182, registration number 5Y-BME was preparing to land when the incident happened at about 4 p.m..

The plane had departed Rea Vipingo in Kilifi and was to land at the airport in Nairobi, officials said.

Police and aviation officials said the plane developed mechanical complications as the pilot prepared to land at the airport.

The incident happened as the Gardens hosted tens of revelers who are still celebrating the New Year.

They scampered for their safety as it came down. The scene was later secured as experts moved in to investigate the incident.

Fire engines from the Kenya Airports Authority and County Government rushed to the scene when news of the crash went out.

Investigators from Air Accident Investigation Department at the ministry of transport have launched investigations into the cause of the crash.

The officials said they will share their findings with the Kenya Civil Aviation Authority, air operators and the general public.

The airport’s surroundings are common with such incidents. A number of accidents involving trainee pilots usually occur in the area mostly as they take off. Some of the incidents have in the past been fatal.—Xinhua