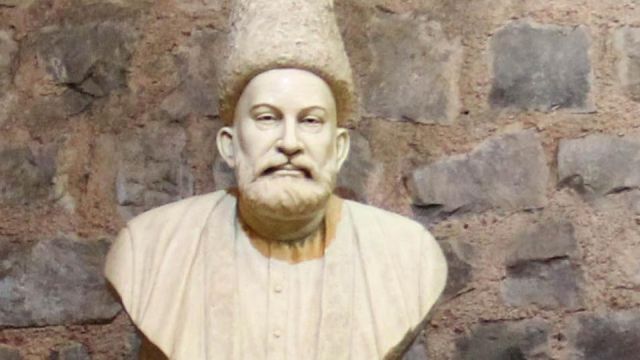 His white-bearded and tall fur hat sporting visage is among the those of a handful of global wordsmiths familiar by their very appearance – Shakespeare, Pushkin, Tagore, Tolstoy, et al even as he is being forgotten in his homeland. This is rather unfortunate for Mirza Ghalib, whose fame was mostly posthumous and appeal transcends the Urdu he wrote in.

A preeminent poet of Urdu and the only one along with Iqbal, to have specific sections of study and criticism named after him – Ghalibiyat and Iqbaliyat, Mirza Ghalib, whose 220th birth anniversary falls on Wednesday (December 27) remains an remote figure for most Indians — especially in the 21st century.

This is despite a popular film, TV series, a host of ghazals, and even appearance in at least one Bollywood song (“Ishq par zor nahin Ghalib ne kaha hai..” in “Ek Duje Ke Liye”) and the occasional furore over preserving his ‘haveli’ in Old Delhi.

How many of us know Mirza Asadullah Khan ‘Ghalib’ (1797-1869) began writing with the pen name ‘Asad’, was known as ‘Mirza Nausha’ in his time, and was eclipsed by a host of contemporaries — right from the Emperor Bahadur Shah ‘Zafar’ himself, to the royal preceptor, Sheikh Ibrahim ‘Zauq’, Hakim Momin Khan ‘Momin’, Mufti Sadruddin Khan ‘Azurda’ and more.

And then, he was equally adept in Persian too — like all educated and cultured Indians to the time — Hindu and Muslim — and also has a Diwan of Persian poetry to his credit. He was an incomparable prose stylist too, who could have established a prized place for himself in the pantheon of Urdu literature on the strength of his correspondence and autobiography only.

But it is his Urdu ghazals — a total of 235 — he is most known for, especially their rendition by the subcontinent’s most famous singers – K.L. Saigal, Mohammed Rafi, Habib Wali Mohammad, Mehdi Hasan, Ghulam Ali, Jagjit Singh, Begum Akhtar, Suraiyya, Farida Khanum, Lata Mangeshkar, Asha Bhosle, Abida Parveen and down to Rahat Fateh Ali Khan.

Lets take a dozen of his most famous ghazals to give a taste of his poetry, which spanned both simple and complex construction, and dealt with issues of longing, identity, expression, existence and loss, besides the staple of love.

One of the simplest begins “Dil-e-nadaan tujhe hua kya hai/Aakhir is dard ki dava kya hai” and has that immortal couplet: “Main bhi munh mein zabaan rakhta hoon/Kaash poochho ki mudda kya hai”. On the other hand, there is one beginning: “Bazeecha-e-atfaal hai duniya mere aage/Hota hai shab-o-roz tamasha mere aage”. If this makes you reach out an Urdu speaking friend, “bazeecha-e-atfal” means children’s playground and was a phrase he introduced to the Urdu language.

It is is not entirely unalloyed despair, for there are also couplets like “Jab vo jamaal-e-dilfaroz, surat-e-mahr-e-nimroz/Aap hi ho nazaarasoz, parde mein munh chupaye kyun” – or loosely “Why does that one whose beauty enlightens the heart, with a gaze like the midday sun/Whose look is itself burning veil her face”.

This could have been the best tribute for himself but his later contemporaries were kinder. While Faiz Ahmed Faiz titled his first book of verse “Naqsh-e-Faryadi” after the opening words of the first ghazal in Ghalib’s Diwan, Asrar-ul-Haq ‘Majaz Lakhnavi’ was reciting at a mushaira when a baby began crying in the audience.

Stopping his verse, Majaz instead recited the first line of the couplet in an appeal to the parents: “Naqsh fariyaadi hai kis ki shokhi-e-tahreer ka… (Whose handwriting is this complainant a copy of..”

This is how great poets live on.