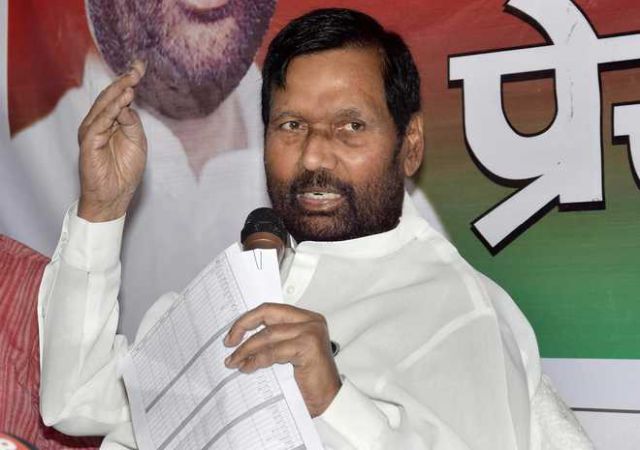 By V.S. Chandrasekar and Brajendranath Singh,

New Delhi : The government will issue an ordinance to uphold the rights of Scheduled Castes and Scheduled Tribes if the Supreme Court does not go back on its judgment deleting the provision of immediate arrest on complaints from Dalits, says Food Minister Ram Vilas Paswan, who asserts that the Constitution too will be amended if need be.

He acknowledged that the government had a problem of perception on the Dalit issue but felt this can be set right in no time if sufficient steps were taken.

“This anti-Dalit perception of the government can be changed in mere two days. The matter will be heard on May 3 in the court. I have said that if the court’s verdict will not be in favour (of those who demand retention of the original provisions), we (government) will go for an ordinance and that too without a change of comma and full stop in the original SC and ST (Prevention of Atrocities) Act,” Paswan told IANS in an interview.

Asked whether the government will seek to nullify the court verdict if it does not change its order, he said: “Yes. We will not allow the dilution of the Act at any cost. Even a comma and full-stop will be retained as in the Act. The Act will continue in its original form. We will do whatever needed to protect the rights of SCs and STs. If need be, we will go for constitutional amendment too.”

Paswan, the Dalit face of the NDA government, has been leading a campaign in pushing the government to file a review petition in the Supreme Court against the March 20 two-bench order that a government official or a civilian cannot be immediately arrested if a FIR is filed by a person belonging to SCs and STs.

The Supreme Court had said that arrest under the Act was not mandatory and recourse to coercive action would be taken only after preliminary inquiry and sanction by the competent authority. The court said the arrest should be cleared by an official of the Superintendent of Police after a complaint is filed.

The government filed a review petition earlier this month seeking an immediate stay of the judgment but the court refused to grant any relief saying the ruling had been misunderstand.

Paswan, a key member of the Group of Ministers on the issue headed by Home Minister Rajnath Singh, said the government would adopt a similar approach on reservation in promotions in government and public sector organisations.

“All the three conditions do not apply. No one can charge any SC/ST Class I officer that he is not efficient. I have asked the AG to go to court and put forward these points. Even if the court does not agree, we will not hesitate to bring an ordinance. If need be, we will bring amendments in the constitution.”

Paswan had campaigned strongly for reservations for Other Backward Classes in the late 80s as part of the V.P. Singh government. “When I speak, the message goes that I am speaking as I am a Dalit.”

He said the government had done a lot for the SC and ST communities but the perception that should have been there in public mind was not there.

“V.P. Singh was from a royal family and an upper caste leader. But after nine months as Prime Minister the perception about him changed. There were slogans in his favour like ‘Raja Nahi Fakir Hai, Desh Ki Taqdeer Hai’. He became a leader of Dalits, poor and backward classes.

“This government is working a lot but is not able to propagate its work properly among the SC/ST communities. During the Una incident in Gujarat in 2016 (in which Dalits associated with disposing of dead cattle were lynched, the state government took action. They replaced the Chief Minister. Around 36 officials were transferred but they didn’t put these things before the public properly. If Indira Gandhi would have been there, she would had spoken loudly about it. I did this and I did that for Dalits.

“Modiji belongs to the weaker section of the society. He is from Most Backward Caste (MBC). He is also from a very poor family, economically and socially. But the kind of perception should have been there for him is not there. Just because he has a tag of being from RSS and the BJP. As a result, the perception about him is not changing. All his good work gets washed away when someone says something unwanted and unwarranted.”

Paswan said it was Mayawati who as as Chief Minister of Uttar Pradesh issued an order in October 2007 against the misuse of the SC and ST (Prevention of Atrocities) Act and said that police should register a case only after probing a complaint.

“It was she who weakened the Act and despite that she calls herself a Dalit leader.”

Asked why the government reacted late in filing the review petition, Paswan said: “Every department has its own style of functioning. If I get a work, I call the officials concerned and take decisions without delay… The court’s verdict came on March 20 and the review petition was filed in April due to weekend holidays and other reasons.”

He said the Law Minister should have discussed the issue in a day or two with the Attorney General. “I met the Prime Minister with other MPs over the issue. A GoM also met under Rajnath Singh where I put up my concerns.”

He said the Prime Minister told everyone clearly to file a review petition.

Paswan said the Supreme Court had “broken the teeth” of the Act. The court said the accused can get anticipatory bail before his arrest.

(V.S. Chandrasekar can be contacted at chandru.v@ians.in while Brajendranath Singh can be reached at brajendra.n@ians.in)

BJP-RSS politics and economic plight of Dalits in India