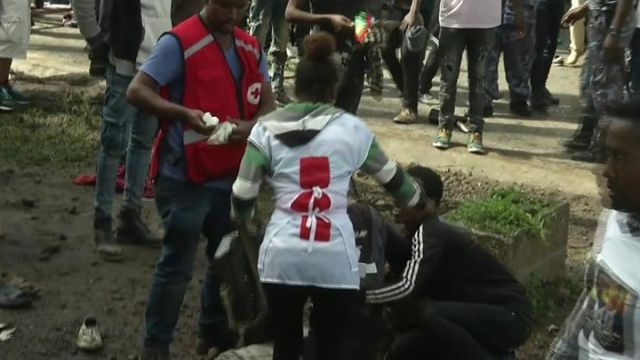 Addis Ababa : A grenade blast at a crowded rally in support of Ethiopia’s new reformist Prime Minister Abiy Ahmed on Saturday killed at least one person and injured over 154 others.

The explosion took place at the rally attended by thousands, shortly after Ahmed finished a speech at the capital’s Meskel Square. He soon took to public television to inform that the attack had killed people, though he did not specify the number, the BBC reported.

Ethiopia’s Health Minister Amir Aman tweeted that one person had died and 154 were injured, 10 of them critically.

Ahmed described it as an “unsuccessful attempt by forces who do not want to see Ethiopia united” and said attacks would not stop his ruling coalition from carrying out its reformist programme that seeks to increase democracy in the country.

He was whisked away immediately after the blast. According to local media, two women and a man were arrested from the scene.

Ahmed became Prime Minister after his predecessor Hailemariam Desalegn unexpectedly resigned in February. He is also the country’s first leader from the ethnic Oromo group, which has been at the centre of nearly three years of anti-government protests that have left hundreds dead.

The government has been accused of human rights violations including torture and extrajudicial killing of political dissidents.

Since taking office, Ahmed has passed a series of reforms, including unblocking hundreds of websites and TV channels. He has also said he is ready to implement in full a peace deal with Eritrea that was signed in 2000 after a two-year war.

In a Twitter post, the EU mission to Ethiopia, expressed “heartfelt condolences” to the Ethiopian people and the government for the victims of the “cowardly attack”.

The US Embassy in Addis Ababa also condemned the blast, tweeting: “Violence has no place as Ethiopia pursues meaningful political and economic reforms.”