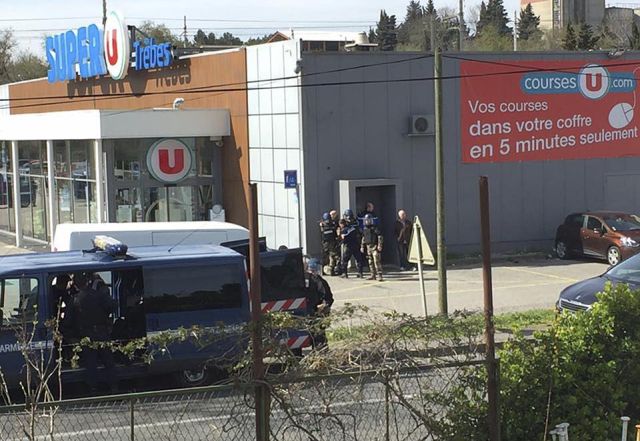 Paris : A gunman was shot dead after killing at least two people in a hostage situation at a supermarket in a southern French town on Friday in what officials treated as “an act of terror”.

The incident unfolded in the morning at a Super U supermarket in Trebes town where the attacker opened fire and held several people hostage. Police stormed into the supermarket leading to a standoff that lasted about three hours, CNN reported.

Reports said the gunman, who pledged allegiance to the Islamic State terror group, killed two hostages before he was shot dead by the police. “The hostage-taker has been shot down,” Interior Minister Gérard Collomb said on his Twitter account.

Later in a press conference, Collomb identified the alleged assailant as a 26-year-old common criminal and small-time drug dealer.

Earlier in the day the same man had shot at a group of police officers in city of Carcassonne, injuring one.

The gunman, believed to be a Moroccan and reportedly known to French intelligence services, was said to be heavily armed and asked for the release of Salah Abdeslam, the key surviving suspect in the 2015 Paris attacks which killed 130 people.

French Prime Minister Edouard Philippe said on Twitter that all information about the supermarket attack pointed to “an act of terror”. The Paris prosecutor’s office said it was opening an investigation into a “terrorist act”, as well as murder and attempted murder.

French President Emmanuel Macron, who was in Brussels at an EU leaders’ summit, described the hostage incident as a “terror attack” and said he would return to the country promptly.

“Everything leads us to believe that it is indeed a terror attack which is, as I said, still ongoing. The police … intervened in a very coordinated manner after what was first an attack against police officers,” Macron said at a press conference alongside German Chancellor Angela Merkel.

France has been hit with several deadly terror attacks since 2015 and has been on high alert since. A state of Emergency put in place after the 2015 attacks in Paris was lifted in October.