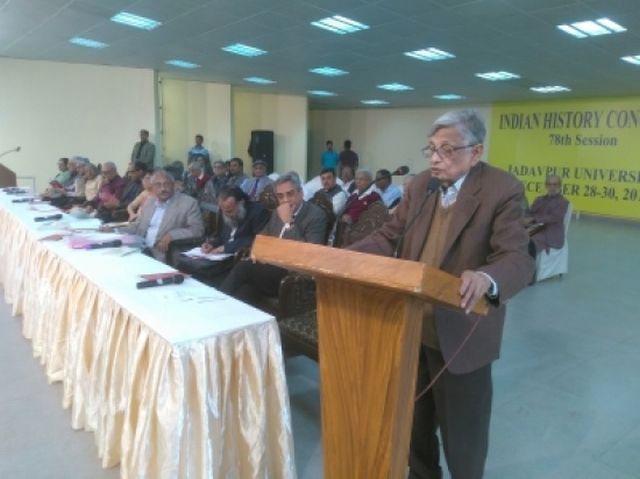 New Delhi : With the BJP continuing its attack on Rahul Gandhi for his reported remark that the Congress was a party of Muslims, historian S. Irfan Habib, a participant in the July 11 meeting, on Monday denied that the Congress President made any such reference.

“He (Rahul) didn’t say that at all. I didn’t hear it. Nobody will say that. BJP, a majoritarian party, will never say that. No party would ever say that,” Syed Irfan Habib, an Indian historian of science and a well-known intellectual, told IANS.

“…he (Rahul) spoke about the poor sections of society, which have been the strength of the Congress all these years,” Habib added.

He said Rahul agreed that the Congress “got weakened” after losing the support of the poor sections, and that it needed to bring them back to the fold.

“What Congress party has to do, according to him (Rahul), is to win back those sections — minorities and Dalits,” he said.

“He spoke about the Muslims along with other sections. He said ‘we have to take corrective measures’ to bring these sections back to the party, be more accommodative. Nobody is talking about it,” said Habib.

A news report in an Urdu Daily Inquilab had said that Congress’ minority unit chief Nadeem Javed had confirmed that Rahul Gandhi did say that “Congress is a Muslim party” during his meeting with Muslim intellectuals.

Those who met Rahul for their feedback on various issues and for a discussion on “public policy” included M.S. Farooqui, Amir Mohammad, Syeda Hameed, Ilyas Malik, Rakhshanda Jalil, Junaid Rehman, Farah Naqvi and others.

Inquilab Bureau Chief Mumtaz Ali Rizvi told a news channel: “Questions are being raised on their leadership. I challenge that Rahul-ji should tweet to say what I have written in the newspaper was not told by him.” He said Congress should come out and say that it is not a party of the Muslims. “In one rhetoric, it will be clear. I will leave journalism,” he said.

Surjewala, however, questioned if a particular newspaper or its representative was present in the meeting that was attended by a select group of individuals. “That’s the first question to be asked and the answer is in the negative,” he said.

On Javed’s interview to the newspaper, the Congress leader said: “I took the liberty of trying to read even the misquoted interview that has appeared and I tried to write it in Hindi because I can’t read Urdu, except a few words.”

“What he said was this and let me quote: ‘yaad rakhiye kisi bhi mulk ki taraqqi, kisi ek tabqe, yaani warg ki taraqqi se nahi ho sakti. Balki har tabqe ki taraqqui se mulk taraqqui karega (remember that no country can develop with the development of just one community. Development of all communities can lead to the development of the country).'” “This is what Rahul Gandhi had said,” Surjewala quoted Javed as saying.

“The BJP and PM Modi are now dependent upon only polarization. Like the East India Company, they follow the principle of division,” he said.

Javed later told a news channel: “To say that Congress is only the party of Muslims is a very stupid thing to say. The Congress President can’t say this. No mature politician would say this. Propably, the editor failed to understand what I said,” he said.