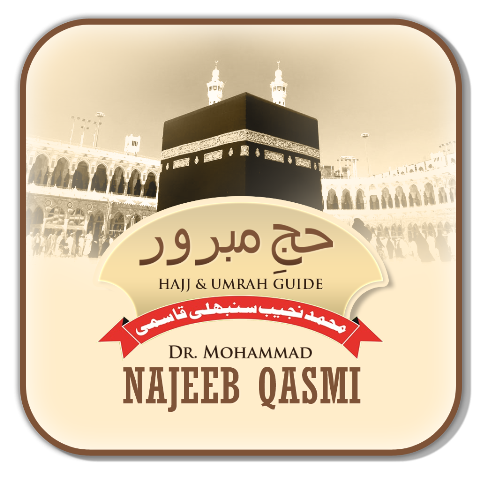 Riyadh (KSA): Considering the need of Hajj pilgrims, Dr. Mohammad Najeeb Qasmi has developed the first Islamic Mobile App (Hajj-e-Mabroor) consisting of different issues of Hajj & Umrah in Urdu, English and Hindi languages. This App can be installed on iPhone as well as Android mobiles by typing Hajj-e-Mabroor or Najeeb Qasmi in Play Store or App Store.

After installing this App within 2 minutes, one can have 4 books on Hajj & Umrah (Hajj-e-Mabroor, Mukhtasar Hajj-e-Mabroor, How to Perform Umrah? and Visit of Madinah), 9 Lectures, Method of performing Hajj & Umrah, Presentation, one hour Questioner and 23 articles will be in the hands of Hajj pilgrims and can be used anywhere during the journey, in Makkah, Mina, Muzdalifah and Arafat.

The lectures, articles and books have been written taking into consideration, the increasing number of Hajj pilgrims, architectural changes in Masjid-e-Haram, Masjid-e-Nabawi, the holy sites (Mina, Muzdalifah and Arafat) and ten years’ regular services given to Hajj pilgrims. This App will be of much use for the Hajj Pilgrims and after the installation of this App, there is no need of bringing the books of Hajj & Umrah.

Various famous Indo-Pak Ulama, religious institutes and professors of several universities have also recommended to use the App by writing Recommendation Letters in its support. All these letters are the part of this App.

The website (www.najeebqasmi.com) and the other App (Deen-e-Islam) can also be used to take free benefit from other books (17 in Urdu, 14 in English and 14 in Hindi) by Dr. Mohammad Najeeb Qasmi, articles and lectures.