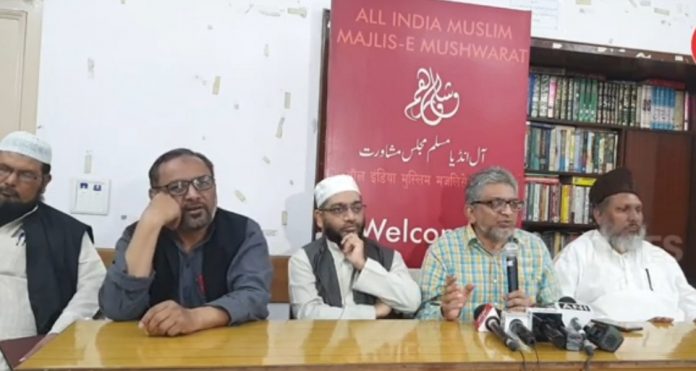 New Delhi: Concerned over “polarized nature of India’s polity”, the All India Muslim Majlis-e-Mushawarat (AIMMM) has decided to hold two-day interactive sessions involving community organisations and public intellectuals on May 20-21 in Delhi to find “workable solutions’ to restore the atmosphere of peace and communal amity.

The AIMMM, India’s apex consultative forum for Muslim organizations, in the press conference, called on Saturday to share the outline of the programme, said concerned citizens including community leaders, intellectuals, advocates and some retired bureaucrats would chalk out plans to save the country from slipping into a “totalitarian state”.  “It seems the current dispensation has set a calendar of hate campaigns – all centred around Muslims – ignoring pressing issues of the people,” said AIMIM president Navaid Hamid on the side-lines of the press meet.

A press note issued by the umbrella body states: “Unfortunately, every step of the government seems to be the manifestation of converting India into a majoritarian democracy,” underlining the need for urgent action to prevent the largest democracy from turning into “a totalitarian state”.

Muslim organizations in the recent past had held several inter-religious interactions in an attempt to bring sane-minded people on board, but they ended up with some “ideal propositions and lofty statements,” triggering a sense of hopelessness among the Muslim community. “The Muslims organizations have limited themselves to the symposiums and seminars…Such exercises will end up with some photographs in Urdu press,” said a journalist who has been covering the community issues for nearly three decades. He also enumerated specifically the failure of the All India Muslim Personal Law Board (AIMPLB) and other religious bodies. When asked, Hamid chose to dismiss it, preferring to throw the question back. “Do you suggest us not go to courts anymore? We are let down by democratic institutions, agencies, press etc,” he said and referred to a number of global reports which downgraded India’s democratic status with many warning of impending danger of genocide.

Taking dim view of the judiciary, Hamid said, “There are some setbacks, but still Muslims have reposed faith in the institutions,” adding that “Muslims have connected their future with the country, so it is obvious for them to stand save it from turning into a chaos.”

Recently, more than a hundred retired civil servants in an open letter to Prime Minister Narendra Modi called for an end to hate violence that had “embedded itself deep in the recesses of the structures, institutions and processes of governance.”

“The hate campaigns are  rooted in the rhetoric of right-wing groups at the national level that are targeting Muslims through provocation, a campaign emboldened by the silence of the country’s top leaders,” wrote the New York Times in its recent column. Waves of communal incidents and hate speeches against Muslims during Hindu religious processions in at least half a dozen states were part of a “worrisome new pattern with the same characteristics and one sided punishments”.

Further, an Amnesty International report found that after months anti-citizenship turned violent in 2020, the police arrested “Muslims on a mass scale immediately after the riots even though the minority community bore the brunt of the violence” and accused officers of  torturing people.” Activists and analysts say that the bottom line is: If you defend yourself, the government will apply all means to  harass you.

Indian Muslims are not afraid of anyone : AIMMM president Navaid Hamid