New Delhi: Internal bickering and battle of egos “intensified” in the All India Muslim Majlis-e-Mushawarat (AIMMM) with its former president Dr Zafarul Islam Khan, along with dozens of other members, accusing current chief Navaid Hamid of “illegally holding” the position – an allegation which holds little merit in the face of the Supreme Guidance Council (SGC) of the apex Muslim forum validating continuance of the incumbent president.

The SGC, which oversees and guides the 57-year-old umbrella body of several community organisations, has made an appeal to all the members to abide by the principles set forth for smooth functioning. In a letter dated October 10, SGC chairman Maulana Jalaluddin Umri appealed to all the members to bury the past bitterness and work together in the interest of the community. But there seems to be few takers as the issue has now come into the public domain, fuelling angst in the community against the ‘leaders’.

As many as 35 members, including Khan, said in a letter that the AIMMM has become “virtually defunct” demanding an immediate meeting of the general body, which according to them, has not been convened in the last two years. He further claimed that the current tenure ended on 31 December 2019, but Hamid continued to hold on to the position “without an election for the last two years”, prompting him to go to press. He, however, said that he didn’t approach the media first. “No. We sent the letter first to him and only NEXT day I released it to the media…”

Hamid assailed Khan for bringing the internal matter into the public domain before trying to resolve it without any bitterness. Hamid, however, said that he had given a call for the meeting but it was postponed due to the coronavirus pandemic. Speaking with Muslim Mirror, Hamid also claimed that four-five signatories of the letter, released by Khan, have been expelled from the organization years ago. Hamid showed the letter of SGC chairman Maulana Jalaluddin Umri in his defence, insisting that the council’s decision is final in accordance with the guidelines of the AIMMM’s constitution.

But Khan described Jalaluddin Umri’s letter as his “personal opinion” and added: “The other point is that Mr Navaid continued to function during that two-year tenure normally and I gave a bulky dossier proving this to Jalaluddin saheb during the last meeting of the Supreme Guidance Council over a year ago. We can dig out the date. Why Jalaluddin saheb acted illegally and why did he not consider that dossier? I have an answer but I will not spell it out,” he added.

A visibly upset Hamid expressed concern over the state of affairs in the AIMMM. He said, “Since beginning, I found my path strewn with thorns. I had double tasks: setting the house in order and streamlining the Mushawarat.” said Hamid.

He further elaborated, “Ever since I became president of the AIMMM for the first time, the attitude of some people towards me was unwelcoming. They treated me like an ‘outsider’. I tried to streamline the Mushawarat, which probably they didn’t like and kept teasing and taunting me, creating hurdles.” He added that the SGC several times tried to arrange truce, but in vain. “They even took the issue to the court,” he concluded.

There’s growing apprehension among a section of members that the issue will stretch further, leading to disruption in the AIMMM’s functioning. People closely observing the disturbing situation are not inclined to believe that the “adamant” Khan would pay heed to the SGC advice. They are also apprehensive about the completion of the current committee’s tenure.

Below is the English translation of the letter of the Supreme Guidance Council:

“For the past almost three years, Mushawarat has been facing some internal problems. The brief record of which is that in December, the election process of the President and the Working Committee of the Mushawarat was underway, the results of which were to be announced on December 5. However, some members went to the court expressing their displeasure with the election process. The court stayed the election process on December 3, banned the announcement of results and ordered the ballot papers to be locked and sealed. The disgruntled gentlemen withdrew the case by filing a writ petition in the court on January 5, saying that two years of tenure (meeqat) has been completed, therefore the case lost its relevance and they filed a plea for its withdrawal. While dismissing the case citing the statement of the parties, the court lifted the ban on the election process and its results.  But the announcement of the results was delayed due to the Returning Officer’s own personal issues.

After the results were declared, the members expressed different opinions on this which can be broadly divided into two categories. Some gentlemen opined that the election was for the 2018-19 term which ended a year ago and a fresh election should be held for a new term. The second opinion was that the results were announced after the ban was lifted by the court, therefore the new meeqat should start with this.

Based on written opinions and oral suggestions from Council members, it is appropriate to recognize the results of the President and the Working Committee after the court lifted the ban. And with the announcement of the results, the new meeqat should begin. The work done by the President and the Working Committee during this period was counted as an interim period not as a formal term in accordance with Article 24 (1) of the Constitution of the Mushawarat.

All members of the Mushawarat were asked to ignore past discussions and bitterness. Keeping in mind the situation of the community which is passing through a critical phase, members are requested to fully cooperate with Mushawarat in its activities with open mind.  It is also the responsibility of the President to try to get all the members together. May Allah be our supporter and helper?Regards 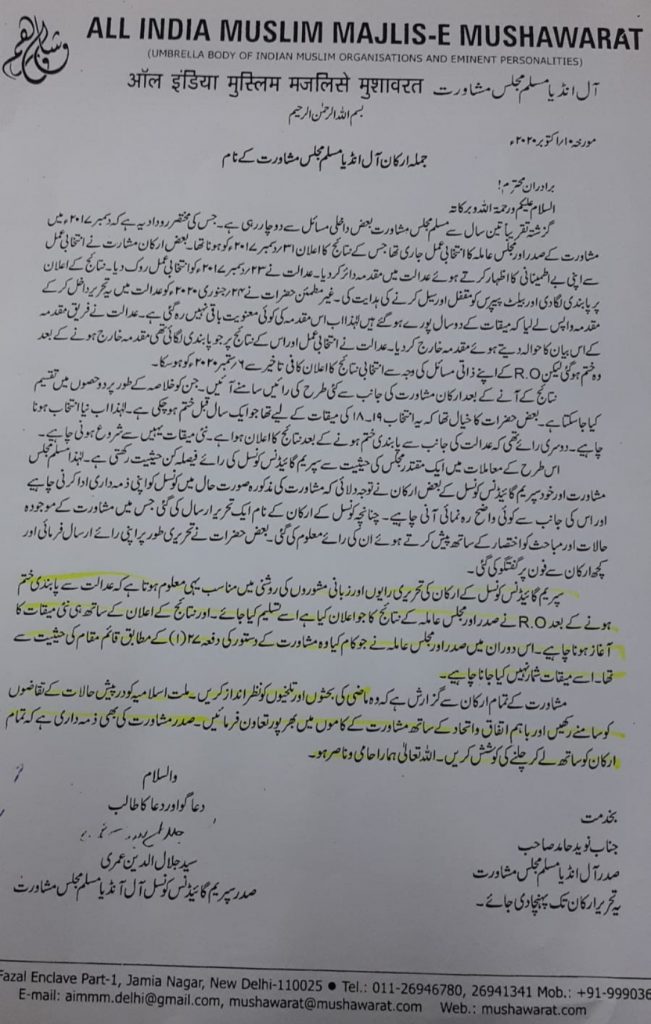