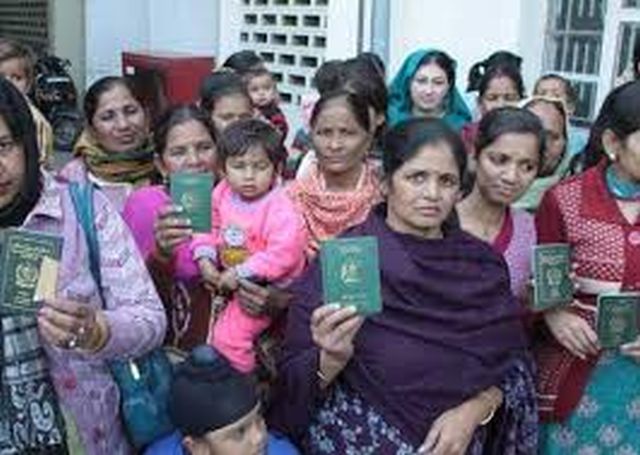 Jodhpur : At a time when the world is battling one of its biggest refugee crises, India has its own share of the problem — thousands of Hindu migrants from Pakistan remain stranded at this Rajasthan transit hub. They have been awaiting their citizenship papers for years, despite submitting their passports, documents and hard-earned money too.

Although the world observed International Refugee Day in June, these migrants continue to run from pillar to post to check their status as a callous Indian bureaucracy works at its own inefficient pace unmoved by their plight.

Wandering like a nomad, one of these migrants, Anumaal, told IANS: “Our lives have become deplorable since the time we came to India. The longing to be a part of this country forced me to come here. But since then, from the year 2000 in April, we have been making untiring efforts to get citizenship, but to no avail.”

“My son has completed his 12th, but he couldn’t get admission in any college as the authorities demand domicile certificates and other identity proof. Eventually, he started working as a labourer to ensure we don’t die of hunger. His future has become dark and the same will be the case with my other son who is pursuing his 12th. Eighteen years of running from here to there has failed to bring any result for us,” he lamented.

“In a camp organised in the year 2005, we missed submitting our certificate by a day. The officials asked us to come with a certificate but it being a Saturday, we reached on Monday and since then, our grievances remain unheard,” Anumaal added.

“We surrendered our passports, our forms were duly filled, and they asked us to come along with a certificate. However, when we reached on Monday, we were informed that we can’t be given citizenship as they had received fresh instructions from the government. Since then, we have been meeting district collectors… the home secretary too, but to no avail. We have exhausted all our savings to pay these officials. We have even borrowed money, which has now exhausted. Now we are asked to fill in fresh forms and deposit fresh fees. When asked about the money we had already deposited, the officials said its gone, so forget about it and make a fresh start.

“There are many people like me who are running around in distress. We were doing agriculture in Pakistan but here we are forced to work as labourers. Initially, during partition, we lost our ancestral land which was seized by residents of Pakistan. Most of the Hindus lost their lands at that time. Now this is the second time we are losing a lot. We were initially in Jaisalmer. However, we left the place a long time back because of the water crisis. It is an irony that people consider us as Pakistanis now, which is quite sad to hear,” he added.

Then there is Dr Rajkumar Sharma, who practises medicine and was whose citizenship was confirmed on June 17. He said, “We came to Jodhpur in 2004. Since then, we have been working hard to make a decent living. There are thousands like me who have come here, their passports have been submitted, but they are yet to get their citizenship. The major challenge for them is getting a long-term visa (LTV) which gets stuck in red tapism,” he added.

Sharma said that he, being educated, managed to earn his bread and butter. “But when I think of other people like me who have migrated, I have tears in my eyes. They are really suffering. People refuse to give them a house on rent or a job to earn considering them as Pakistanis. More than 1,000 people are awaiting their long-term visas,” he informed.

“I belonged to Sindh and came here as Muslims were not so kind to Hindus in Pakistan. Radicalism was growing and so was their influence. Although we had land there, we preferred coming here leaving everything as we knew that things might become challenging in the coming days for Hindus,” he said, adding: “Now, when I have got citizenship, I will try to clear the Medical Council of India examination so that I can start my practice here.”

Dr Hindu Singh Soda, an activist for Pakistani minorities living in India, said that the number of Total Registered Migrants (TRMs) at various FROs in Rajasthan is 13,623. Of them, 12,253 are at FRO Jodhpur alone. Of them, 3,408 were granted LTVs in 2017 while rest of the applications are still under process.

On paper, an LTV is supposed to be granted within 120 days of applying; but in almost all cases, these are not granted for many years, he said, adding that 965 migrants were permanently sent back to Pakistan in 2016 and 2017.

Soda said red-tapism is to be blamed for this situation. Also, the processing of LTVs needs to be hastened to ensure the migrants get justice in India — a land for which they have left everything in Pakistan, he added.

(Archana Sharma can be contacted at archana.s@ians.in)