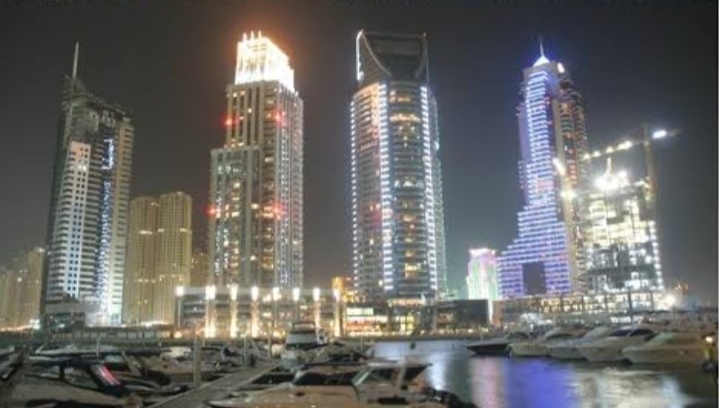 Dubai is a place of dazzling lights. It is a storyline of the proverbial ‘Camel to Cadillac’, a land of dreams but that dream is now in doldrums!  Where has Dubai, the capital of UAE, now in an embrace of Israel,  gone wrong? The cardinal missing-point lies way back, when after the discovery of oil, Dubai started to ‘buy and build’ and soon became the ‘centre-point’ of world biggest buildings and skyscrapers with splendid landscapes that are not even that easy to encapsulate in a camera. Dubai and UAE went wrong as it did not build its own industries, it did not synergise its indigenous population towards enterprise, and slowly and slowly, started to become increasingly dependent of borrowed-work-force, which all is in disarray, due to the outbreak of COVID-19 pandemic, sending Dubai into deep trouble.

Today Dubai’s emblematic, most iconic and its ambassadorial and tallest building in the world i.e. Burj Al Khalifa builder Arabtec is learnt to have gone bankrupt! As news is pouring-in that Arabtec is now on its way towards liquidation which by itself is nothing short of a landslide, according to a news published in In.Reuters.Com on October 7, 2020 1. Arabtec is said to have been given capital-injections between 2013-17, but ‘management changes, layoff and rounds of restructuring, Arabtec shareholders, which include Abu Dhadi state fund Mubadala decided last week that the Gulf’s largest listed contractor should file for insolvency.  The liquidation, likely to lead to further layoffs in a company which had a 40,000 strong workforce at the end of last year, marks the end of an era of plentiful construction for local contractors. “A great company that is 45 years old disappeared off the face of the earth. I find it extremely sad that an iconic company like that disappeared,” Ziad Makhzoumi, chief financial officer of Arabtec from September 2008 to March 2013, told Reuters’.

When Burj Al Khalifa was inaugurated in 2010 the world was in awe and Dubai was tagged to the next business and tourism hub of the world, and within a matter of decade, the economy of Dubai and UAE has downsized to such an extent that a gloomy picture is writ large on it, as Arabtec which once aimed to be one of the ten top builders of the world, according to thenational.ae 2  has down spiraled to be on the verge of oblivion, as civil-aviation, hospitality, hotel, travel and tourism industries, which were the bedrock of Dubai economy have been the worst ever hit by COVID-19 virus.  The tactics even from the pre-COVID-19 era, in order to upkeep its thriving economy, by roping-in Indian cinema star Shahrukh Khan (2017) or Italian soccer sensation Lionel Messi (February 2020) as a global ambassador of Dubai Expo 2020, have however, not yielded the desired results as COVID-19 seem to have painted ‘the whole scenario bleak’ for the times ahead in Dubai.

It would also be worth noting that debt over Dubai has straddled to such heights that, according to CNBC.Com on October 8, 2020 3, UAE’s ‘S&P Global Ratings expects Dubai’s economy will contract sharply by around 11% in 2020, owing in part to its concentration in travel and tourism, two of the industries most affected by COVID-19, the agency wrote in a client note last week. It sees the economy “only recovering to 2019 levels by 2023.”’ Hence, broadly speaking Dubai economy does not seem to recover anytime before the next three years, but even that could be a wishful thinking as things may take until 2030 to finally recover. However, the construction business in Dubai will not be able to find any redemption, in any near future, as Dubai in the past recent years had built buildings almost so indiscriminately, that it could not attract the desired investors hence it led to this stalemate.

In order to recover Dubai implemented VAT from January 2018, which was likewise done in Kingdom of Saudi Arabia too, but it actually resulted in the rise of inflation and turned out to put a negative impact on economy, informed GulfBusiness.Com on June 4, 2020 4 , almost six months after implementation, and much before the surfacing of COVID-19, according to Forbes.Com on August 6, 2019 5 speculated ‘Signs of strain in Dubai’s tourism industry – one of the critical parts of its economy – (were) growing, with a $15bn hotel building boom taking place against a backdrop of plateauing visitor numbers. Among the indications of difficulty, the local Emaar Properties reported a sharp drop in revenue from its hospitality business in the first quarter of this year, with the figure falling by 14% to AED388m ($105.7m). And in late July Bloomberg  reported that Dubai-based Jumeirah Group – which operates the iconic Burj Al-Arab hotel as well as numerous other properties around the city – was cutting 500 staff.’

The construction business sector, which was the spine of Dubai economic wherewithal,  has nosedived to such a low that ArabianBusiness.Com on October 8, 2020 6 ran a story ‘Why property prices are falling faster in the UAE than the rest of the world’. The report said ‘The real estate sector was already battling sluggish market conditions long before Covid-19 arrived. But the pandemic, in combination with the postponement of Expo 2020, has added further uncertainty, characterised by projects being delayed, and both values and rental yields reflecting the unfavourable climate.’

With the economic meltdown in the face, UAE has decided to invite people from all across the world with offers of its nationality but the move has not found a ‘race’ for it. Perhaps, the time for it has long passed, as the entire world is scared out of Corona Virus, with rumours of its ‘second-wave’ loomimg large, has made people stick to their nerves. But, what the Arab world is facing today, alongside KSA, Bahrain and Kuwait etc, is the cardinal wrong of not developing its own industries and export system, and no breakthrough in terms of any educational or scientific achievements, whereas, Israel, their new neighbour, though thoroughly supported by US, has made strides in the field of education, science and technology, to such an extent that Israel is just second to none in terms of computer software building and information technology so much so that  Arab states engage Israel services for phone hacking etc! Reported just the latest report in Haaretz on September 16, 2020 7.

How will now Dubai lift its sinking fortunes? Considering the morass it is right now into, it seems that the lower-paid-job-workers are now to be packed-off, and certainly the bulk of them are from Pakistan and Bangladesh. India however, is sitting pretty as India and Israel are the nations Arab-states are looking for their future with. UAE and Bahrain has established full diplomatic relations with Israel and very soon all the 22 Arab states are to embrace Israel with the exception of may be Qatar, Iran and Pakistan. Israel will provide to the military and security apparatus and India with its mammoth bulk-force, and Arab states will make merry until the last drop of oil oozes out, with no industry and enterprise of their own. No wonder India and Israel are to have a field-day in the coming days with the specter of Greater-Israel hovering at the end of the road.

The writer is a former State Information Commissioner, India. He is a media analyst and writes on International Politics.