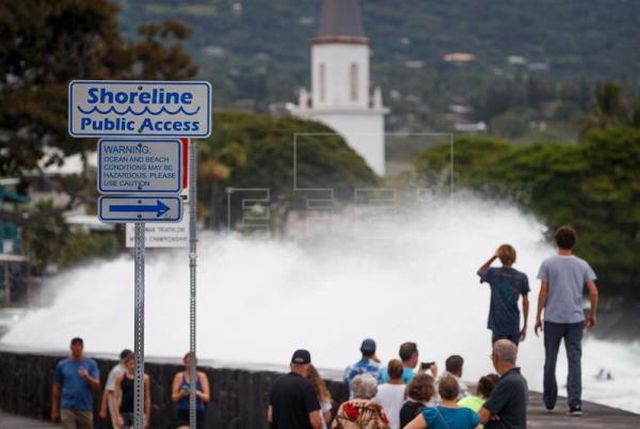 Honolulu : Hurricane Lane was downgraded to a category-3 storm as it moved near Hawaii, after already dumping heavy rains and causing landslides in some areas of the island, the US National Meteorological Service said.

Lane, which is threatening to develop into the most powerful storm in decades in the archipelago, lashed the Big Island of the Hawaiian archipelago with strong winds and almost 50 cm of rain in the last 24 hours on Thursday, reports Efe news.

The storm is expected to make landfall on Friday morning.

“Lane, while it has been downgraded, is wide and very moist. And it’s going to hang around for a while as it moves, because it is moving slowly,” Honolulu Mayor Kirk Caldwell said.

“And that is why we are taking so much precaution here.”

According to weather forecasts, the centre of the hurricane is packing sustained winds of 210 km per hour.

Meanwhile, President Donald Trump on Thursday declared a state of emergency in Hawaii.

It authorises the Department of Homeland Security and the Federal Emergency Management Agency to coordinate their rescue and relief efforts in natural disasters and to funnel federal funds to the areas affected, the White house said in a statemen.

The aim of the measure is to save lives and safeguard private property and public health to minimising or avoiding the threat of a catastrophe on the island.

A hurricane warning is in effect for the Big Island as well as Maui County and Oahu. Kauai and Niihau are under a hurricane watch, meaning hurricane conditions are possible and that winds of at least 39 mph are anticipated in the comings days, reports CNN.

The 15 airports throughout the state will remain open as long they don’t suffer damage to their infrastructure or the debris “makes flight operations unsafe”, the Hawaii Department of Transportation said in a statement.

nly two hurricanes have made landfall in Hawaii since the 1950s: Hurricane Dot in 1959, and Hurricane Iniki in 1992.