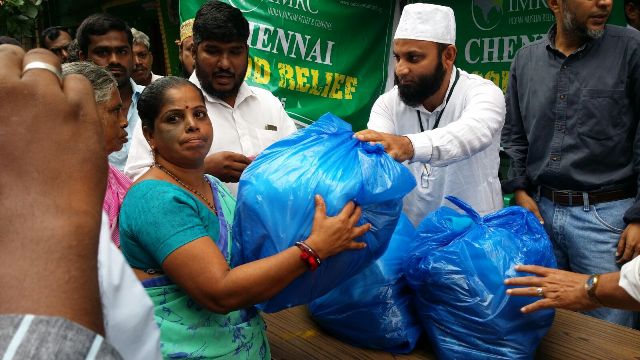 Chennai/Hyderabad:  A team of volunteers of the US based Indian Muslim Relief & Charities (IMRC) are working in flood hit Chennai for last five days, providing immediate relief materials to the poor and needy.

They distributed relief in the localities of several poorer pockets of the city, including Washermanpet ,VOC Nagar, Puliyanthope, Srinivasapuram, Kanikapuram, Wanagaram, slums around Mount Road, etc.  “In the first phase of our relief work, we aim to reach out to at least 5000 flood affected people in Chennai,” Najeeb said, adding that they have already distributed materials to about 2000 people and will continue the relief in the coming days, depending on the need.

On December 7 and 8, IMRC organised two health camps in Washermanpet and Puliyanthope localities, attending to over 1000 patients. Free medicines and medical advises were given to the poorer victims of the heavy deluge caused due to low pressure in the sea.

Meanwhile, on December 8, IMRC Executive Director Manzoor Ghori, who is on a short trip to India to assess the organisation’s work, visited Chennai and met the flood victims to observe firsthand the gravity of the situation.

“Water has receded now from most localities and life is coming back to normalcy. But it will take months to restore the damages caused to poorer families particularly,” Manzoor Ghori said, adding that after completing the first phase of relief they will decide on the future course of action based on the need of the people.

Last week, Chennai witnessed the worst rainfall in 100 years that caused serious flooding. About 270 people are already reported dead while thousands of people, mostly poor,  are stranded, their houses destroyed.

Indian Muslim Relief & Charities (IMRC) is a US based non-profit organization which began in 1981 and helps run several programmes throughout the country in partnership with over 100 organizations. It focuses on providing education, emergency relief, medical & legal aid, shelter and food for the needy and runs schools, orphanage, hospital, colleges, etc.  IMRC has been at the forefront of providing immediate relief to affected victims of the 2015 Nepal earthquake, 2014 Kashmir Floods, 2013 Muzaffarnagar riots, 2012 Assam riots, and other natural/man-made calamities.

Those willing to help the flood victims in Chennai can do so by clicking here: http://www.imrcusa.org/chennai-floods/