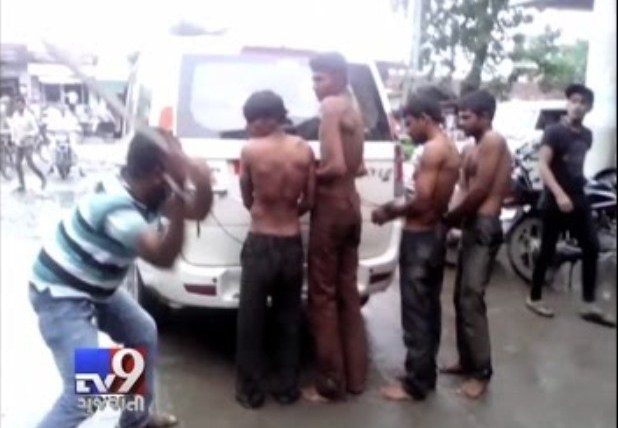 As violent protests continue in the Prime Minister’s home state of Gujarat over the flogging of Dalit youth by upper-caste Hindu vigilantes, an IndiaSpend analysis reveals a conviction rate six times lower than the Indian average — over 10 years — for crimes against scheduled castes (SCs) and scheduled tribes (STs).

Dalit unrest began on July 11, 2016, when four Dalit youth were tied to a car and gau rakshaks, or cow protectors, took turns to flog them as a crowd watched. The crime: Skinning a dead cow. Later, the upper-caste vigilantes posted a video of the flogging on social media as a warning of sorts to others — Dalits and Muslims. The video of another attack in May has also now emerged.

The Gujarat government has arrested suspects, but the gau rakshaksÂ’ courage appears rooted in the failures of GujaratÂ’s criminal-justice system in addressing crimes against the lowest of Hindu castes and tribes. A similar failure is evident in Maharashtra and Karnataka.

Over a decade, conviction rate of crimes against SCs is 5 per cent; against STs, 4.3 per cent

Over the decade ending 2014, the average conviction rate in cases of crimes against SCs in Gujarat was five per cent; in crimes against STs, it was 4.3 per cent. The national average was 29.2 per cent and 25.6 per cent, according to NCRB data.

The conviction rate for all crimes registered under the Indian Penal Code nationwide was 45.1 per cent in 2014.

Â“If the conviction rate is low, people who can afford a good lawyer know that they can get away with their crime,Â” Supreme Court lawyer Kamlesh Kumar Mishra said.

Karnataka and Maharashtra are on par with Gujarat, with a similar five per cent conviction rate for crimes against SCs/STs. In Uttar Pradesh and Uttarakhand, about half of such cases end in conviction.

Â“There is discrimination at each point in the whole chain of access to justice for Dalits and Adivasis (as STs are called),Â” said Paul Divakar, Convener of the National Campaign on Dalit Human Rights, an advocacy group, pointing to flawed chargesheets and investigations.

Mishra said it was up to the Gujarat government to implement long-pending reforms recommended by various commissions to improve convictions and try pending cases. Lower courts in Gujarat need 287 years to clear pending cases, IndiaSpend reported in December 2015.

SCs and STs endure widespread discrimination and lag the general population in education, jobs and income, we reported earlier this month. Crime against SCs/STs is also rising, IndiaSpend reported, a reflection of greater reporting of cases, and a consequence of upper-caste resentment against growing assertiveness.

Â“Society can now accept a Dalit crossing an upper caste area on a bicycle, but it still hasnÂ’t accepted the idea of a Dalit riding a Royal Enfield,Â” Dalit writer Chandra Bhan Prasad said in a Mint interview. Â“Upper castes feel threatened as Dalits now feel equal to them and even confront them.Â”

(23.07.2016 – In arrangement with IndiaSpend.org, a data-driven, non-profit, public interest journalism platform. Nikhil M. Babu is a Delhi-based independent journalist. The views expressed are those of IndiaSpend. The author can be contacted at respond@indiaspend.org)—IANS