New Delhi: Pakistan High Commissioner Sohail Mahmood said on Tuesday that the incoming new government under the leadership of Imran Khan in Pakistan wants good relationship with neighbors, including India and the solution of Jammu and Kashmir dispute through peaceful means. He also said it is a positive development that the Indian Prime Minister made a phone call to congratulate Imran Khan and such steps would create the space for improving relations between both the countries.

Delivering speech on the flag-hoisting ceremony on the occasion of Pakistan’s 72nd Independence Day here on the Chancery’s lawns, Mahmood said the new leadership accords high priority to peaceful relations with all neighbours in South Asia.

“Peaceful relations with all of Pakistan’s neighbors, including India, were accorded high priority in the foreign policy vision outlined by the incoming leadership in Pakistan.”

In his speech, the Pakistan envoy also touched upon the Indo-Pak relations. He pointed out that the peculiar trajectory of India-Pakistan relations over the past 71 years had often led to political and military tensions and prevented the two countries from realizing their optimal potential in socio-economic development.

However, it is a good sign that Prime Minister Narendra Modi telephoned Pakistan Tehreek-e-Insaaf chairman Imran Khan and congratulated him, he said.

“The phone call by Prime Minister Narendra Modi to Chairman PTI Imran Khan was another positive development. It was being hoped that such steps on both sides would create the space for betterment of ties between India and Pakistan”.

Speaking in Urdu, he emphasized that the Pakistani leadership “always wanted peaceful relations with India on the basis of mutual request and equality”.

“The new leadership has made a detailed reference to relations with India in which importance was given to ending blame-game, finding a judicious solution to the Kashmir issue through talks, and increasing trade and people to people contact.”

“Our next generations deserve a better future – one marked by peace and opportunities for progress and prosperity,” he said. He hoped that South Asia would turn a corner and would be known in the world, not for confrontation, but for cooperation as the region has been left behind in the race for progress because of tensions. 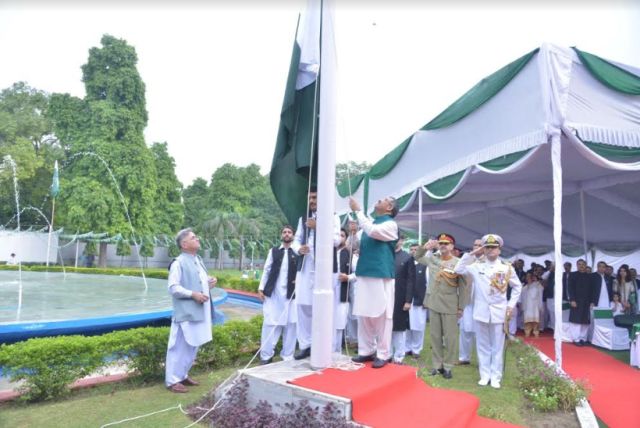 High Commissioner Mahmood noted that this Independence Day coincided with another milestone on Pakistan’s democratic journey. Another democratically-elected government had completed its constitutional term and another peaceful transfer of power to another elected government was on the anvil.

He underlined that Quaid-e-Azam envisioned a democratic, modern, moderate, economically-strong, Islamic welfare state. Each successive generation had contributed to the realization of the Quaid’s vision, he said.

Students of the Pakistan High Commission School presented national songs and tableau on the occasion. Mrs. Mahwish Sohail gave away prizes and gifts to the teachers and students from the school.