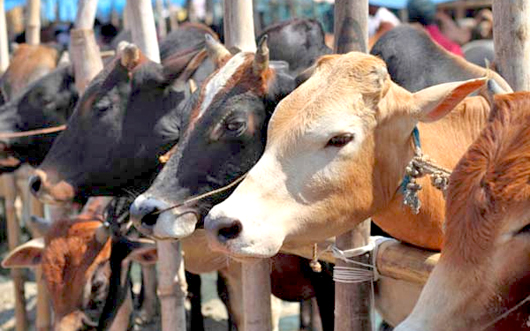 New Delhi. : The double standard of the Modi government on issues on nationalism and religion is no secret.The emboldened Gau rakshaks under the present hindutva government are on killing spree of its own people in the homeland in the name of beef while the government has not shied away from exporting the beef(Buffalo meet) to a country called Pakistan which is almost in the category of an enemy country.

According to United States Department of Agriculture data, India became number 1 in Beef export replacing Brazil. The latest data from 2016 show India and Brazil tied on top — with both countries accounting for just under 20% each of the world’s total beef exports. They, along with Australia and New Zealand, are the world’s largest beef exporting countries, as per the US data.

It needs to be mentioned here that India does not export officially export the meat of cows and the beef export here means buffalo meat.

The large chunk of India’s buffalo meat exports are to Asian countries — 11 of the top 15 destinations for buffalo meat by value in 2015-16 were in Asia and 3 in Africa (Algeria, Egypt, and Angola). Russia was the 15th destination — at No. 15 in the list of the top 15.

It may be noted that Vietnam does not consume all the buffalo meat and bulk of its import from India make way to China.A grey market has developed in recent times, with Chinese traders reportedly using Vietnam’s Haiphong port to bring in Indian buffalo meat loaded on small vessels.

India’s beef export is attractive in the world due to its lower prices, along with the proximity to key consuming markets in Southeast Asia and West Asia,

It is really paradoxical that on the one hand the BJP government is pushing hard for a complete ban on beef including buffalo pan India and on the other hand, the government does not hesitate to export beef even to an ‘enemy’ country like Pakistan.