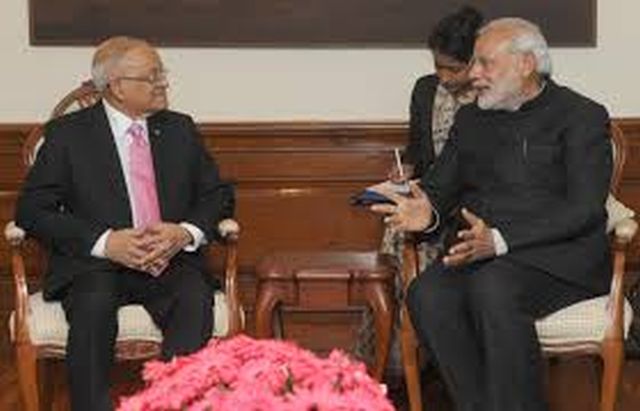 New Delhi : India on Thursday expressed over the political situation in the Maldives where former President Maumoon Abdul Gayoom and Supreme Court Chief Justice Abdulla Saeed have been sentenced to long terms in prison.

A statement issued by the External Affairs Ministry said that since the beginning of the political crisis in the the Maldives in February when emergency was imposed, India has repeatedly urged the government of the Indian Ocean archipelago nation “to allow all institutions, including the Supreme Court and the Parliament, to function in a free and independent manner, and to permit genuine political dialogue between all political parties”.

“This has also been the demand of the international community at large,” the statement said

“It is, therefore, with deep dismay that we learned that the former President of the Maldives as well as the Chief Justice of the Supreme Court are being sentenced to long prison terms without fair trial,” it stated.

“This casts doubt on the commitment of the government of the Maldives to uphold the rule of law and will also call into question the credibility of the entire process of presidential elections in September this year.”

The statement also said India believes that a democratic, stable and prosperous Maldives is in the interests of all its neighbours and friends in the Indian Ocean.

“It reiterates its advice to the government of the Maldives to restore the credibility of the electoral and political process by immediately releasing political prisoners including former President Gayoom and Chief Justice Abdulla Saeed and creating the necessary conditions for the participation of all political forces in the presidential elections.”

On Wednesday, a court in the Maldives court sentenced Gayoom, accused of plotting to overthrow the government, to 19 months in prison for failing to cooperate with the police investigation.

Gayoom, 80, who ruled the country from 1978 to 2008, is the second former president to be jailed under President Yameen Abdul Gayoom’s rule. He was arrested in February on charges of attempting to overthrow the government of Yameen, his half-brother.

A court sentenced him to one year, seven months and six days in prison for failing to hand over his mobile phone to investigators. The country’s chief justice, Abdulla Saeed, who was arrested with Gayoom, was also given the same sentence for the same offence on Wednesday.

Mohamed Nasheed, who was the country’s first freely elected president in 2008, was earlier given a 13-year sentence in a trial widely criticised for due process violations. However, he has been living in exile in Britain.

Yameen’s former vice president, Ahmed Adeeb, another Supreme Court justice, two former defence ministers, a prosecutor general and opposition lawmakers are among those who have been jailed during Yameen’s tenure following trials that have come under fire for alleged lack of fairness.

A five-member Supreme Court bench in February ordered the release and retrial of Nasheed and other prisoners, calling their sentences politically motivated. However, Yameen declared a state of emergency on February 5 and had Saeed, another justice, Ali Hameed, and Gayoom arrested.

The emergency was lifted in March.