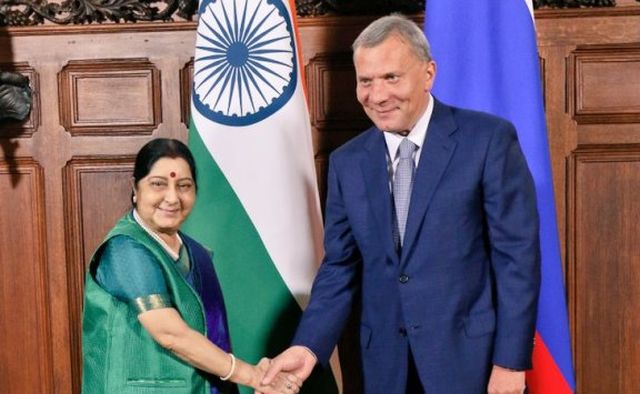 Moscow : India and Russia have set a new two-way investment target of $50 billion by 2025 following a meeting between Indian External Affairs Minister Sushma Swaraj and Russian Deputy Prime Minister Yury Borisov here on Friday during which bilateral cooperation across various sectors was reviewed.

Addressing the media after co-chairing with Borisov the 23rd India-Russia Inter-Governmental Commission on Technical and Economic Cooperation (IRIGC-TEC), Sushma Swaraj said in 2017, the annual trade between India and Russia reached $10.17 billion.

“We discussed ways and means to increase this momentum, ensure balanced trade and remove barriers to trade,” she said.

“Two-way investments have already crossed the $30-billion target, which we had set for 2025.

“We have therefore proposed that we enhance this figure to $50 billion by 2025.”

IRIGC-TEC is a standing body which annually meets and reviews ongoing activities of bilateral cooperation.

The Commission, after taking stock of bilateral cooperation in various fields, provides policy recommendations and directions in the fields concerned.

Friday’s meeting prepared the groundwork for the annual India-Russia bilateral summit between Indian Prime Minister Narendra Modi and Russian President Vladimir Putin, to be held in New Delhi next month.

Russia is one of only two countries with which India holds annual bilateral summits, the other being Japan.

The India-Russia bilateral relationship was elevated to Special and Privileged Strategic Partnership in 2010.

Modi and Putin have already met twice this year — at an informal summit in the Russian resort city of Sochi in May and then on the sidelines of the BRICS (Brazil, Russia, India, China and South Africa) Summit in South Africa in June.

In her address, Sushma Swaraj said in the IRIGC-TEC meeting, both sides discussed the possibilities of working together on projects in third countries as a new dimension of the strategic partnership.

Pointing out that there has been significant expansion in cultural and tourism exchanges, she said: “Tourism flows in both directions has shown impressive growth. We are working on further liberalising visa regulations on both sides.”

In this connection, she also welcomed the initiative of the Russian government to enable electronic visas for Indian nationals visiting the Russia “far east”.

With energy being traditional area of cooperation, Sushma Swaraj said that earlier this year the first shipment of liquefied natural gas (LNG) from Russia reached India “in a new breakthrough of our energy partnership”.

“We have identified new areas of cooperation such as agriculture, infrastructure, transport and science and technology,” she said.

“We would like to expand our cooperation in the area of space.”

The Indian Minister also said that both sides have agreed to organise the first-ever India-Russia Business Summit involving major companies from both countries in early October in India.

Soon after her arrival here on Thursday, Sushma Swaraj met Russian Foreign Minister Sergey Lavrov and according to Indian External Affairs Ministry spokesperson Raveesh Kumar, both leaders had a good exchange of views on bilateral and regional issues.