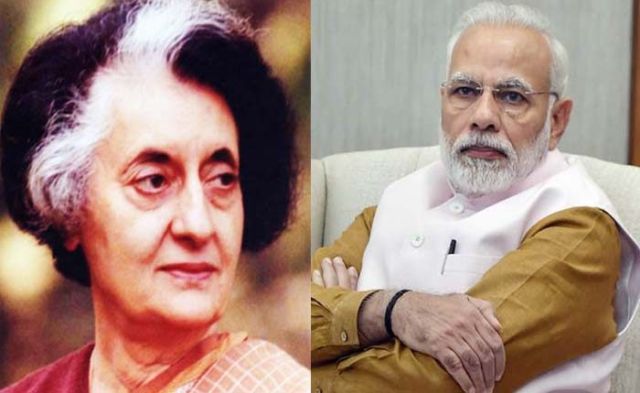 New Delhi : The Congress on Tuesday slammed the BJP for comparing former Prime Minister Indira Gandhi with Hitler and hit out at Union Minister Arun Jaitley for “distortion of history”.

Congress leader Anand Sharma also attacked Narendra Modi and said India was now witnessing a systematic subversion of all institutions that uphold the Constitution and democracy under the watch of an “authoritarian Prime Minister and arrogant government”.

“Indira Gandhi was the tallest leader of her times and a democratically elected popular Prime Minister. Jaitley’s comparison of Indira with Hitler “is absurd, outrageous and a distortion of history”, Sharma tweeted.

“Indira Gandhi’s elected government was sought to be destabilised by unconstitutional and undemocratic methods. Emergency was an aberration and Indira Gandhi had herself expressed regret,” Sharma added.

Sharma said Jaitley was suffering from selective loss of memory.

“Dictators do not hold elections. Let BJP be reminded that Indira Gandhi lifted Emergency to hold free and fair elections. She herself lost and she accepted defeat and the verdict with humility.”

The Emergency came into force on June 25, 1975, leading to suspension of fundamental rights. It lasted till March 21, 1977. The Congress led by Indira Gandhi was voted out of power in the elections held then.

“Jaitley and BJP’s obsession with Hitler is understandable. He comes from the RSS-BJP school who celebrate Hitler and eulogise fascism,” Sharma added.

Sharma added that “the debate was decisively settled in 1980 when the people of India brought Indira Gandhi back with a thumping majority and dumped her tormentors and opponents in the dustbin of history”.

Hitting out at Modi, Sharma said: “What India is witnessing today is a systematic subversion of all institutions that uphold our Constitution and democracy under the watch of an authoritarian Prime Minister and arrogant government, leading to centralisation of power.”

“BJP-RSS cannot insult her memory or belittle her Martyrdom. People of India will remember her as a hero,” he added.