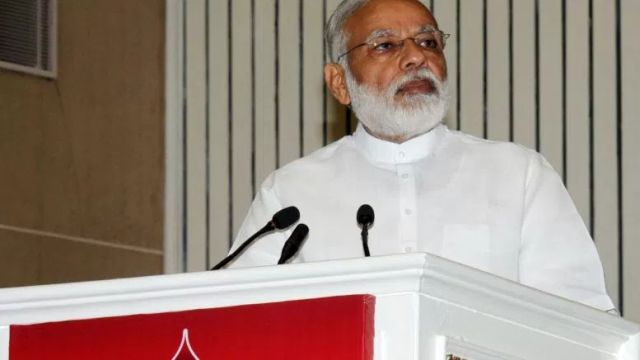 New Delhi : When Prime Minister Narendra Modi visits Sweden and England from April 16 to 20, during the course of which he will participate in the first ever India-Nordic Summit and this year’s Commonwealth Heads of Government Meeting (CHOGM), cooperation in the areas of innovation, technology and education will top his agenda.

Modi will reach Stockholm on April 16 evening in what will be the first prime ministerial visit from India to Sweden in 30 years since the visit of then Prime Minister Rajiv Gandhi in 1988.

On April 17, Modi and his Swedish counterpart Stefan Lofven will hold a bilateral summit during which bilateral, regional and global issues are expected to figure.

According to Sweden’s Ambassador to India Klas Molin, innovation is an important aspect of the India-Sweden relationship.

“How do we cooperate further, how do we get our best and the brightest people together, how do we also perhaps think about funding certain areas, how do we go into areas where we can cooperate even more and develop new technologies, create employment and sustainable solutions on a number of issues,” he said.

During Modi’s visit, an India-Sweden Innovation Partnership is also expected to be launched.

“I think it is something we are discussing with the Indian side but exactly how this will look, of course, will have to be finalised,” the ambassador said.

“But I think it is a way of focusing our attention on both sides to create a platform that, in turn, can attract investments, that can attract companies to plug in.”

With education being another sector in which the two sides are expected to forge deeper ties, Molin said “we are hoping to increase exchanges between our universities”.

“Student exchanges… graduates, doctorate and post-doctorate. The sky is the limit here,” he said.

On bilateral economic relations, the Ambassador said that trade is growing on both sides “and quite impressively so”.

There are over 170 Swedish companies in India that have invested $1.4 billion since 2000 while 70 Indian companies have established their presence in Sweden.

On April 17, India and Sweden will also co-host the first ever India-Nordic Summit, where, apart from Modi and Lofven, the Prime Ministers of the other four Nordic countries of Denmark, Finland, Iceland and Norway will also be present.

Molin said that Nordic countries are close as neighbours and cooperate very closely in a number of issues.

“But we are not a political entity in that way,” he said. “It’s not like the EU, it’s not a regional organisation in any way. It’s a convenient forum.”

According to Subrata Bhattacharjee, Joint Secretary (Central Europe) in the Ministry of External Affairs, the Nordic region represents a prosperous society with high incomes and a strong focus on quality and innovation.”

According to figures provided by the External Affairs Ministry, India’s trade with the Nordic countries totaled around $5.3 billion in 2016-17, with cumulative foreign direct investment in India at $2.5 billion.

From Sweden, Modi will leave for Britain on April 17 evening. This is the third exchange of prime ministerial visits after Modi’s visit to Britain in November 2015 and British Prime Minister Theresa May’s visit to India in November 2016, her first outside the European Union after assuming office.

At a separate media briefing here, British High Commissioner to India Dominic Asquith said the visit comes at a time when the bilateral relationship is in “very, very good health”.

Modi’s visit to Britain this time has been themed “Living bridge and tech partnership”. Modi and May are scheduled to hold a bilateral summit on April 18.

Stating that trade between the two countries increased by 15 per cent in the last one year, Asquith said that it is “remarkably balanced” in terms of trade in goods and services.

In terms of finance, he said the London Stock Exchange is playing an increasingly important role as a place to raise money to meet India’s huge infrastructure requirements.

“Then what will be very much a focal point is the technology partnership between the two countries,” he said. “The complementaries, strengths that each of us have and they are truly complementary.”

Asquith said that both sides will look into putting more resources in this sector in areas like digital aspect of technology, collaboration, artificial intelligence, advanced manufacturing, and data protection and the fintech that goes with that among others.

According to K. Nagaraj Naidu, Joint Secretary (Europe West), both sides are looking at announcing an India-UK Tech Alliance which will comprise young CEOs from both the countries who have done exceptionally well in the tech space.

In terms of cooperation in education, Asquith said that there was a 30 per cent rise in the number of student visas issued by his country to Indians last year.

Stating that 14,000 Indian students go to Britain for masters degree programme every year, he added that “we want to build on that”.

Regarding this year’s Commonwealth Heads of Government Meeting (CHOGM) which Modi will attend in London on April 19-20, the High Commissioner said that around 50 heads of state and government will be present.

The agenda, he said, will include climate change, vulnerability of small island nations, peacekeeping and helping poorer countries.

(Aroonim Bhuyan can be contacted at aroonim.b@ians.in )