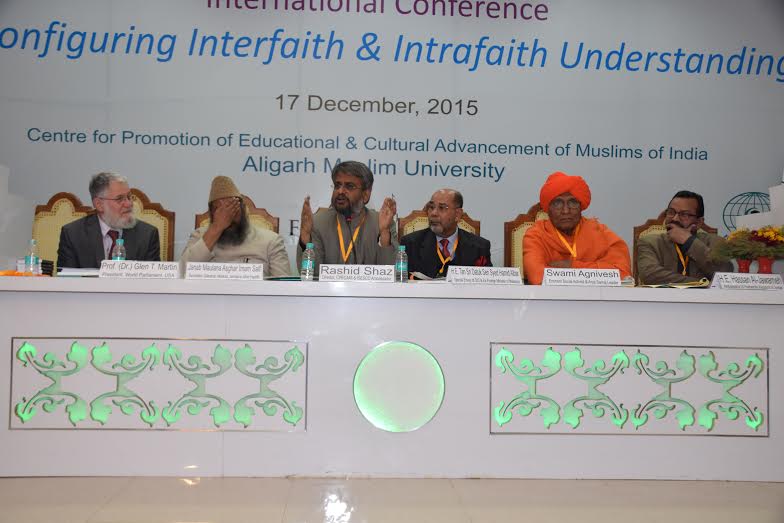 The opening session was also marked by ISESCO Director-General, Abdulaziz Altwaijri’s address in absentia which was read out to the audience by Mr. Ahmad Fawzan. In his address H.E.Dr Abdulaziz Altwaijri pointed out that “the world is in dire need of strengthened dialogue at various levels, particularly among followers of religions, and more particularly among spiritual leaders and the intellectual and scholarly elite.” He further emphasized that “one of the lofty goals pursued by the Islamic Educational, Scientific and Cultural Organization (ISESCO) is to promote dialogue among cultures and civilizations and among followers of religions. Our responsibility in this connection is a moral and religious obligation that we cannot and should not give up. So let us work together to heal the rift and close ranks within the framework of faith-based brotherhood and human solidarity.”

In his Presidential Address, Prof Rashid Shaz, ISESCO Ambassador and Director, Centre for Promotion of Educational and Cultural Advancement of Muslims of India (CPECAMI), Aligarh Muslim University, said that this was no ordinary conference but a wakeup call for all those who care about the future of humanity. Referring to the prevailing chaos in the Muslim world he said that today, in the Middle-East as also elsewhere, Islam is at war with itself. According to Prof Shaz: “the House of Islam is in shambles and our relations with other faith communities are at an all-time low. In the MENA region and elsewhere, a full-scale Muslim-on-Muslim war is raging.  The internecine conflict has already consumed more than 4 million lives. The situation is alarming. This is clearly an Islamic Meltdown. As upholders of the Last Revelation we Muslims were entrusted to invite other faith communities for a ‘common word’ ???? ???? . Today, unfortunately, we need a dialogue within the House of Islam to agree on a common word.” The ALIGARH PLATFORM will, insha’Allah, kick-start the long awaited internal debate. An intra-faith dialogue among Muslims of divergent sects and thoughts holds promise of finding common ground and a collective strategy for survival and progress, asserted Prof Shaz. The event brought a number of renowned ulema and scholars to the negotiating table. The evening session was tabled as “The Aligarh Platform” that brought Shia, Sunni, Breilvi, Deobandi, Ahle hadeeth and sufis together for an honest and frank discussion. The conclave ended with the promise that this initiative will be widened to include more groups and it will be held frequently.