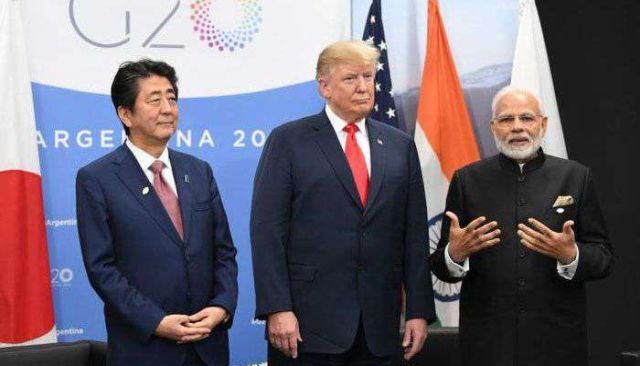 Beijing : China on Monday reacted cautiously to the trilateral meet between India, Japan and the US on the sidelines of the just-concluded G20 summit, saying Beijing was okay to such a set-up if it did not disturb peace in the region.

Indian Prime Minister Narendra Modi, Japanese Prime Minister Shinzo Abe and US President Donald Trump had a meeting in Argentina’s Buenos Aires, an event which came against the backdrop of China’s rising influence.

The three countries are part of the so-called Quad, the fourth member being Australia.

Modi, Abe and Trump appealed for an open and inclusive Indo-Pacific region where the Chinese presence has steadily grown.

“We hope such cooperation will promote mutual trust and cooperation in this region and play a constructive role in promoting the development of peace and prosperity in the region,” he added.

The first such trilateral was an extension of Japan and US bilateral and was dubbed as “JAI” — an acronym for Japan, America and India.