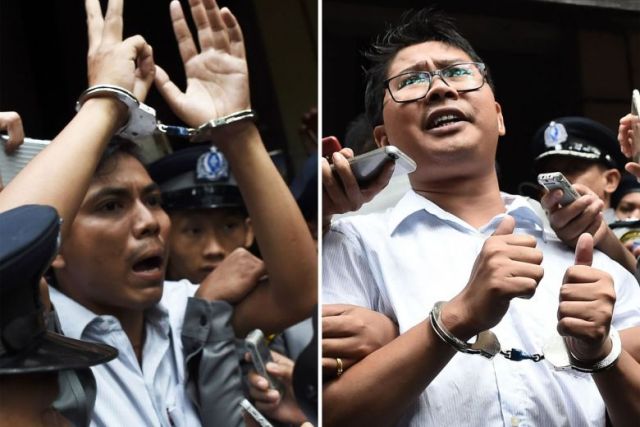 Yangon : Two Reuters journalists jailed for violating Myanmar’s Official Secrets Act appeared in a court here on Monday to appeal against their convictions.

In September, Wa Lone and Kyaw Soe Oo were sentenced to seven years in jail each for allegedly compromising state secrets, while investigating a story on the Rohingya crisis in Rakhine state. The case has been widely seen as a test of press freedom in Myanmar.

The court indicated on Monday that a decision would be announced next month, Efe news reported.

Ahead of the court session, Reuters’ Editor-in-Chief Stephen Adler said the agency was “looking forward to demonstrating to Myanmar’s High Court why it should reverse the convictions… due to the egregious errors committed by the trial court in condemning them to prison for seven years”.

“We will explain to the appellate judge why, under the law, the only possible conclusion is that the appellate court must restore our reporters’ freedom and reaffirm Myanmar’s democratic principles,” Adler said in a statement.

Wa Lone and Kyaw Soe Oo, aged 32 and 28 respectively, were detained on the night of December 12, 2017, in possession of “confidential documents” which they say had been handed to them by two police officers.

In April, police captain Moe Yan Naing testified that a senior official had ordered him and other subordinates to give secret documents to Wa Lone to set him up, a claim the authorities have denied.

The pair were investigating the killing of 10 Rohingya Muslims at Rakhine’s Inn Din village during a Myanmar Army crackdown last year after Rohingya rebels launched a series of attacks on security posts in the region.

Seven Myanmar soldiers were in April sentenced to 10 years in prison for the Inn Din massacre.

On December 11, the Reuters reporters were named by Time magazine as “People of the Year” along with murdered Saudi journalist Jamal Khashoggi and several others.

“These two journalists did not in any way harm Myanmar. Instead, they did it an incredible service: In keeping with the freedoms promised them under Myanmar’s Constitution, they honestly reported the truth,” said Adler.