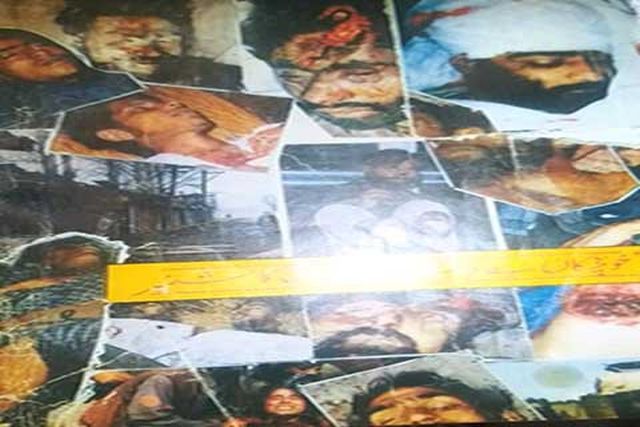 Sopore Massacre is considered as one of the most inhumane attack on civilians in Kashmir by Indian security forces. On the morning of 6 January 1993, a group of 7–8 armed JKLF militants attacked a platoon of Border Security Force soldiers at Baba Yousuf Lane near Sopore and killed at least one soldier.

The Indian troops engaged with the militants returning gun fire. The troops fired at local civilians and set fire to local homes and businesses. Indian troops fired bullets indiscriminately on civilians and killed more than 55 civilians. In this bloody Wednesday some shopkeepers were not allowed to come out and they were burned alive inside shops. Witnesses claim that Indian troops attacked a local coach killing the driver and at least 15 civilians as well as attacking and burning three other cars. In all, official Indian Government reports state that 250 shops and 50 homes were burned down although other sources claim as many as 450 buildings were burned down by the border security force. The Independent reported:

“The Border Security Forces sprayed a public coach with machine-gun fire, killing the driver and more than 15 civilians, said witnesses. Three other cars were also fired on, and then the paramilitary forces set the vehicles ablaze. Next, they began herding the native Kashmiris into shops and houses, said witnesses. Then the security forces shot them, splashed paraffin over the bodies and set the buildings alight.

The Indian government claimed that the high casualties were the result of an intense gun battle between the BSF soldiers and terrorists in which an explosives cache belonging to the militants exploded and spread the fire to nearby buildings.

However, the government later initiated a judicial inquiry into the matter and suspended several BSF officers due to the publicity the incident had generated.[1] The day after the massacre, thousands of Kashmiris, defying a government-imposed curfew, protested against the actions of the BSF soldiers on the streets of Sopore.[2] The then Prime Minister Narasimha Rao ordered State Governor Girish Saxena to visit Sopore and announced a compensation of ₹100,000 (US$1,400) for the relatives of the deceased.

However, Muslim leaders, left-wing politicians and human rights organizations criticised Saxena for failing to stop human rights violations by the security forces in Kashmir and demanded a parliamentary delegation be sent to assess the destruction.