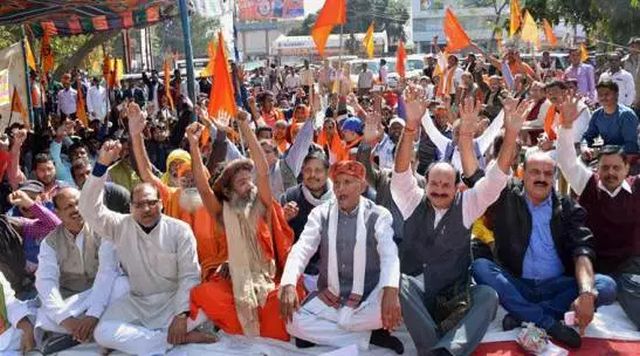 Ranchi : Jharkhand Urban Development Minister C.P. Singh on Wednesday launched an indefinite fast at Kotwali Police Station here to protest against the arrest of five persons of the majority community over communal clashes.

“This protest is against the police who always take action against the majority community, while the criminals from the other community go scot-free,” Singh told reporters.

Earlier in the day, the police arrested five persons after clashes broke out between Hindu and Muslim communities near Pahadi temple here.

The Hindus had on Tuesday accused the Muslims of the area of desecrating the prayer site. The issue was, however, resolved following police intervention. But on Wednesday, members of the two communities once again clashed and pelted stones at each other.

“Some people including policemen and media persons were injured in the stone-pelting incident. Extra forces have been deployed and Section 144 imposed in the area,” City SP Aman Kumar told the media.

In another incident, on Tuesday, six policemen had received injuries in clashes between the members of two communities in the state’s Koderma district.

The problem had begun on Tuesday night when Hindu community members were going for the immersion of Lord Vishwakarma’s idol in Jaynagar of Koderma district. The firecrackers used by Hindus on the occasion were opposed by the minority community members. Later, they started pelting stones at each other in which six policemen and some other others were injured.

Prohibitory orders have been imposed and heavy security personnel have been deployed in Jaynagar.