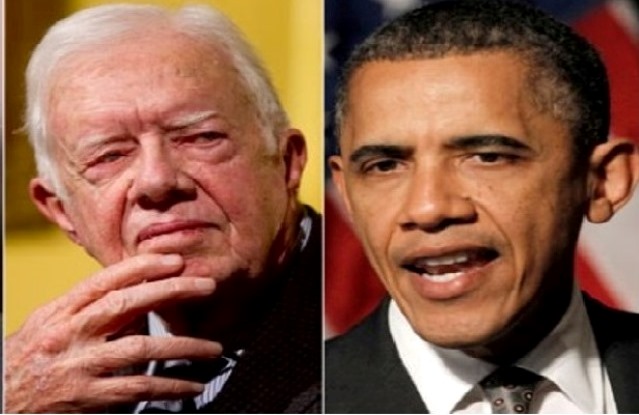 New Delhi :  Former US president Jimmy Carter has made  a ninth-hour appeal to outgoing Pres. Obama. He wrote  an op-ed in The New York Times Monday urging President Barack Obama to formally recognize a Palestinian state before Donald Trump takes office in January.

“I am convinced that the United States can still shape the future of the Israeli-Palestinian conflict before a change in presidents, but time is very short,” he said. “The simple but vital step this administration must take before its term expires on Jan. 20 is to grant American diplomatic recognition to the state of Palestine, as 137 countries have already done, and help it achieve full United Nations membership.”

“The commitment to peace is in danger of abrogation,” he continued. “Israel is building more and more settlements, displacing Palestinians and entrenching its occupation of Palestinian lands.”

Carter also wrote that security guarantees “for both Israel and Palestine are imperative,” as if that were actually possible.

Those who stand for justice for Palestinians, may  send their own letters to the President, on his Whitehouse email address: comments@Whitehouse.gov so that he may be encourage to consider the most crucial but very legal act that a US President can perform that would ensure future peace in the Middle East.